The Apple iPad has come a long way since it’s introduction. Where there used to be only one, there are now multiple versions to choose from. The iOS keyboard used to be a pain to use, but now, typing is surprisingly easy, but it still doesn’t compare to a physical keyboard for getting real work done.

Because there are so many options these days, it can be hard to find the best iPad keyboard for you. In this break down, we will take cost, performance, reliability, and iPad model compatibility into account. With one of these keyboards, you will be able to get your work done just as well as you would be able to on a laptop, so long as you aren’t dependent on PC-only software.

We Now Have a Podcast! We encourage You to Check it Out by Clicking The Play Button Above.

It’s a whole lot easier than reading the article!

The ‘Magic Keyboard’ is by far the best iPad keyboard case we’ve seen. Unfortunately, you can only use this thing on the 2018 and 2020 Apple iPad Pro, but considering the fact that these two models are the apex of Apple’s iPad range, we have to recommend them over other third-party models. It’s simply the best option for the best iPad you can get.

The keys on this keyboard have a generous 1mm of travel, and they give great feedback as you press them. This makes it easy to type at full speed without having to take too much time to acclimate a new keyboard. It’s backlit and has a very rigid construction, so it’s suitable to use on your lap and in any lighting conditions. The trackpad isn’t the largest one we have seen, but because it’s so well designed, it feels bigger than it is. Because iPadOS 13 has really nice cursor support, using the trackpad makes the iPad Pro feel more like a laptop than a tablet.

The iPad Pro’s screen angle can be easily adjusted, and the floating design really does look great. It has really strong magnets that make sure the tablet won’t accidentally come lose. The case has a USB C connector on the side which can be used to charge the iPad, and that leaves the tablet’s USB port free for use.

Apple’s Magic Keyboard is expensive. The 11-inch version costs $300 and the 12.9-inch costs $350; but if you want to work on your iPad in a serious way, it’s the best way to get it done. It’s a great investment.

The design of Brydge Pro+is clearly based on the MacBook’s keyboard, and when the two are connected, they are nearly indistinguishable from a Macbook. The over-sized trackpad used in this keyboard is really what makes that visual effect happen. The keys have three levels of backlight brightness to choose from, depending on your preferences and use-case, and everything plays well with iPadOS 13 using Brydge’s app.

The battery life on this keyboard is stellar, lasting three months on a single charge. It allows the iPad’s screen to be angled up to 180 degrees, so, you can lay it flat. The keyboard is made out of aluminum and comes in Apple’s ‘Space Grey’ color, and it’s got a metal cover that snaps onto the back of your iPad. If you don’t have an iPad Pro you can still get one of Brydge’s keyboards, as they make one every versions of the iPad, including the iPad Mini.

The Apple Smart Keyboard works best with the 7th generation iPad and the 3rd generation iPad Air. But, you can also use it with the older 10.5-inch iPad Pro, though. Like other iPad keyboard solutions, it attaches using magnets. When you aren’t using it, it doubles as a screen cover, and unlike the Magic Keyboard, you don’t have to remove it to use the iPad as a tablet.

The typing performance on this keyboard is really fantastic. It’s a traditional, full-size keyboard, and each key has a really nice tactile feel to it. It doesn’t, however, make the iPad feel like a laptop like the Magic Keyboard does. Because of this, it requires a little time to get used to, but once you’ve acclimated it’s easy to type quickly. Unfortunately, it isn’t back lit, and the keys are somewhat loud as you press them. We like how light this keyboard is, and how easy it is to connect and disconnect from the iPad. We wouldn’t exactly call it ‘heavy’, but it will add a little bulk to your tablet. It’s definitely rigid enough to be used on your lap, but it’s better suited for use on a desk.

Logitech always makes great computer peripherals, and the Logitech Combo Touch is no exception. It’s got a durable construction that feels strong in the hand, and it includes extremely useful rubber bumpers on all four sides of the device, as well as a thick layer of padding. Out of all of the keyboards mentioned in this article so far, this is definitely the one that will provide the most protection to your iPad.

If you own either the standard iPad or iPad Air, you won’t be able to get an Apple Magic Keyboard for your tablet, but the Combo Touch helps fill this gap in the market. The keys have a reasonable amount of travel, and their roomy layout makes great use of the available space. The touch pad feels really responsive, and is actually larger than you might expect; about the same size as a 13-inch Mac Book.

The kickstand helps to secure and prevent the iPad from falling when in use, weather its on a desktop or in your lap. At it’s $150 price-point, this keyboard really is a great value. The only issue that we have with it is that it’s a bit bulky, but honestly, that adds to its protective capabilities. It won’t make your iPad difficult to carry around at all, but keep in mind, when using this as a tablet while having the keyboard still attached, you will notice the extra weight.

The Zagg Rugged Book is a 2 piece solution made for the iPad Mini. The first part is a rugged case, and it’s a compliment is a detachable keyboard. The case has a poly carbonate and silicone construction, so it can stand up to wear and tear pretty well. In fact, the manufacturer claims that it can survive a drop from over 6 and a half feet, although they don’t mention onto what surface. It will definitely add some bulk to your iPad Mini, but considering the fact that this version of the iPad is already so tiny, it won’t be an issue at all.

The keyboard attaches to the included case and can be used in a variety of viewing angles. The keys are backlit, which is always nice, and it uses Bluetooth to connect to your iPad. Because of its tiny form-factor, it’s kind of hard to imagine working for long periods of time with the Rugged Book and the iPad Mini, so it’s nice that it’s detachable.

The Zaggs keyboard contains a battery inside of it which does not require much charging. The company has designed it in such a way that the battery will last really long without plugging in.

You Could Always Just Buy A Bluetooth Keyboard

If your iPad is already safe and snug inside a case, you may not want to buy another case just to add a keyboard. Well, you don’t have to. The iPad is able to connect to any bluetooth wireless keyboard or mouse, so long as you are running iPadOS 13.4 or later. This gives you a ton of alternatives to the items mentioned in this list. Apple’s Magic Keyboard costs about $100, and has a rechargeable battery. Being a full-sized keyboard, it will provide an excellent typing experience.

A keyboard is an extremely useful add-on for an iPad, and the physical design is more important than you may think. The right iPad keyboard can be the difference between getting work done and total frustration. We hope that in reading this article, you’re able to make a better purchasing decision. 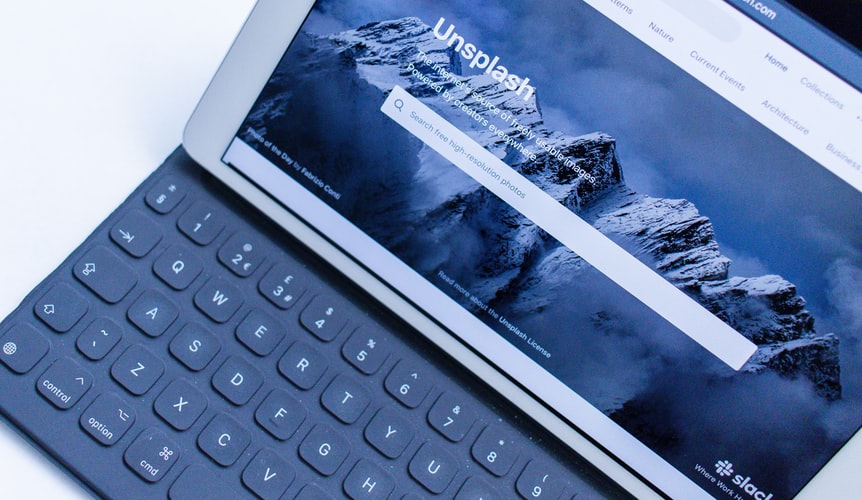