Today, video chatting on services like Facebook messenger and Apple FaceTime seem natural, and with the ongoing COVID-19 pandemic reeking havoc on economies and forcing workers and school-goers to stay at home, video chatting, teleconferencing, and telepresence has become the new normal. Services like Zoom, Google Meet, and Facebook Rooms are becoming more and more popular among businesses and consumers, alike. Believe it or not, for decades, the public showed very little interest in video chatting.

It was 1964, and Bell System, the massive corporation responsible for bringing the world the telephone, introduced a device they called ‘PicturePhone’. The idea was to get everyone to replace their voice-only phones with the new device. The problem was, however, that the monthly cost for PicturePhone and included service was $160 (about $1000 in today’s dollars) a month for the phone and included service. Although prohibitively expensive, Bell’s PicturePhone was an amazing technical achievement. Remember, there was no broadband or even an internet at the time. In fact, the only nation-wide network that existed was the analog phone system, so that’s what they used. Twisted pair copper wire lines.

Using the telephone network, the new PicturePhone system was able to produce a grey-scale (black and white) video on a screen that was about 5 inches across. This was absolutely astonishing for the time, and the device used a CCD (Charged Coupled Device) camera sensor, the same type used in a modern smartphone. The camera had height and width controls so that the image could be easily adjusted.

Although in advertisements for the device, you would see heart-warming scenes such as a grandmother enjoying a chat with her daughter and granddaughter, in reality, very few people actually used the device. It was certainly possible, though, and the device was meant to be the most revolutionary communication medium of the century. However, the Bell System PicturePhone unfortunately failed miserably as a consumer product.

To get people interested in the new platform, Bell created PicturePhone booths in major cities like Chicago, New York, and Washington DC. These facilities were constructed in an attempt to introduce their fancy new high-tech phones to the public. The cost to use the booths was an astounding $20 per minute. That’s $150 today. The company hoped to create a billion dollar business with 1 million phones in use by 1980, and 12 million by the year 2000. The system failed to come anywhere near this figure, though, seeing only 71 people using it within 6 months of its release. By 1970, that number had fallen to literally 0.

The service continued to operate until 1978, until Bell completely gave up on the platform, but not before sinking over half a billion dollars into the project since its inception. The failure isn’t exactly the most interesting part of this story. More captivating, we think, is how close the device came to being the internet.

In the 50’s and 60’s, Bell System engineers had grand visions of a coming media revolution. They foresaw an interconnected world where people could communicate in totally new ways. To make this happen, they knew that a brand new nation-wide network would need to be created, and someone had to pay for it. They were aware of the fact that as long as people only used telephone lines for voice calls, they wouldn’t have too good of a reason to pay for a new broadband network. Why would they? The already-in-place telephone network worked just fine.

With widespread adoption of PicturePhone, however, they could justify the cost of upgrading local infrastructure. This made sense. If enough people took to the new platform, those same people would eventually want new features such as color video, which would definitely require more bandwidth. So, the PicturePhone was Phase 1 hardware intended to spark consumer interest, and to create a demand for a high-speed digital network. In their words, they intended to provide ‘a wide spectrum of consumer services, including PicturePhone’.

Way, way ahead of its time, the PicturePhone even included a feature you’ll definitely be familiar with. Users of the platform could actually share files with each other. Well, kinda. The device could be used to share documents with other users, albeit at a low resolution and only visible on a tiny screen. 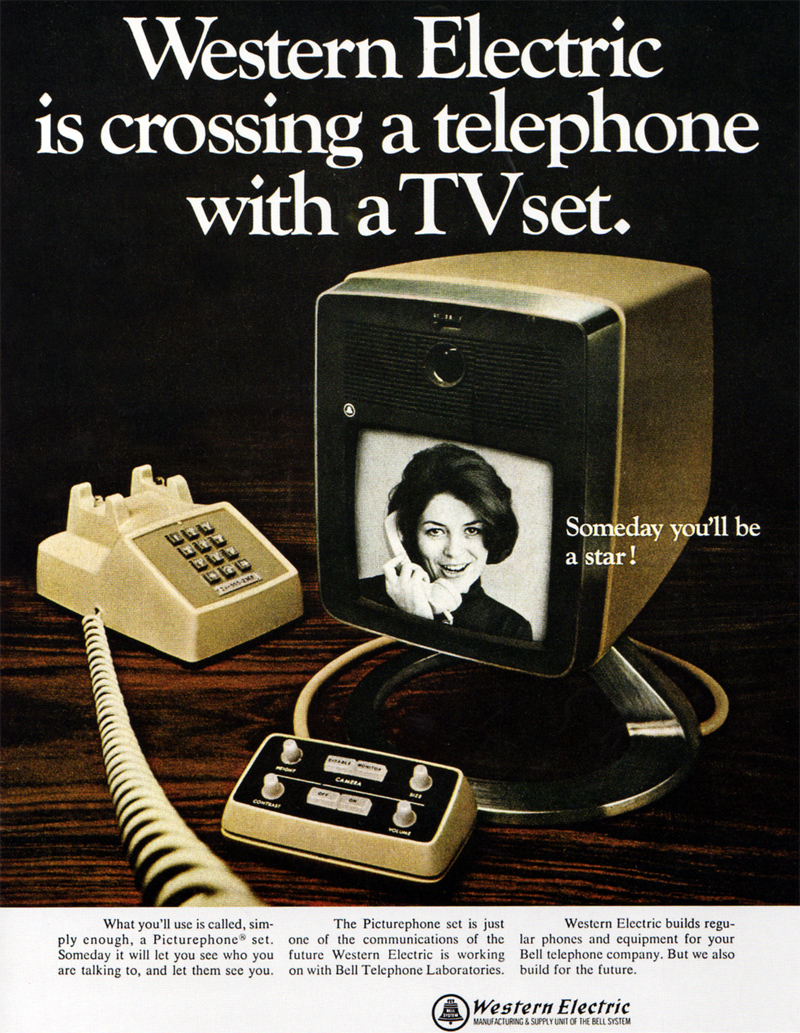