TESS (Transiting Exoplanet Survey Satellite) has already reached mission success. NASA announced that the spacecraft has identified over 2,200 planetary candidates since it started looking back in 2018. Several hundred of these planets are tiny. And because due to the laws of physics, rocky planets just can’t get that big. So, that means that most if not all of these small planets are rocky worlds that are Earth-like.

TESS had originally been tasked with finding 1,600 planets during its first two years of operation.

Some of the planets that TESS has spotted are a bit odd. One of the planets it found was, which is labeled TOI-700 d, is about 100 light-years from earth. Another, LHS 3844 b is a ‘hot super-Earth’ that has a very close orbit to its parent star, only taking 11-hour to orbit. Then there’s TOI 1690 b, which is still in orbit around a star that is the expanding, dying, red giant phase of its lifecycle. Finally there is TOI 849 b. That one seems to be a gas giant with no kidding, no atmosphere.

Remember, these are planetary candidates, not confirmed planets. Only 120 of the discovered objects have been confirmed thus far. Once it finally launches, the James Webb Space Telescope will be able to fully study these candidates in far greater detail. 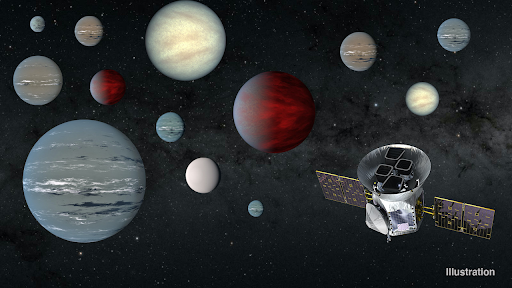