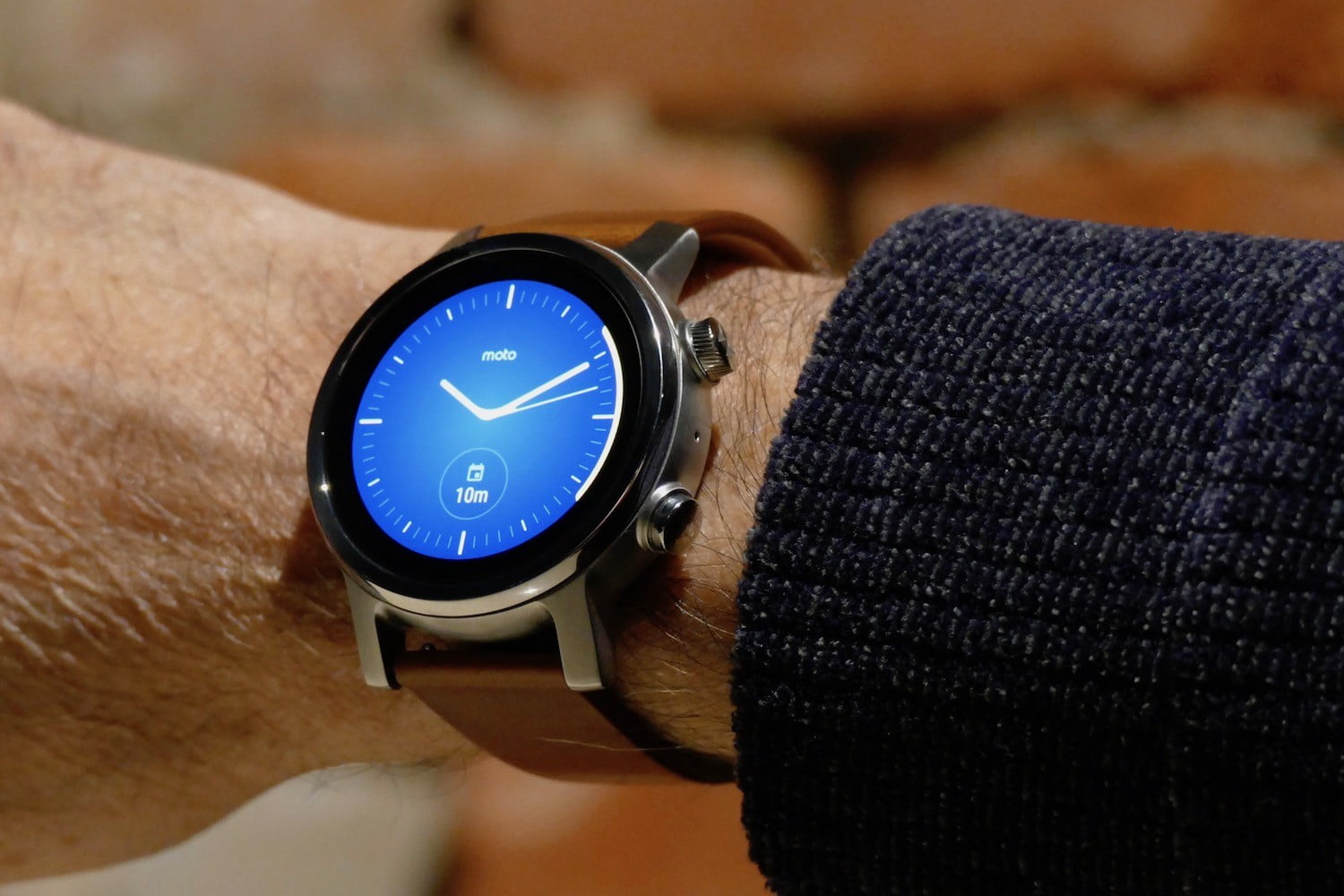 Moto 360 is a smartwatch having a circular watch face. Moto 360 is designed to be minimalist. The Moto 360 does not have a simple user interface rather is snappy. The design of Moto 360 makes it lightweight. Due to lightweight, Moto 360 is very easy to carry. You can wear it all the time. The watch is available in all sizes for all sizes of wrists. The watch cannot be charged without cables and gives a battery life of only one day. The body of the watch is thick, that is not good. It doesn’t look cool with its thick body and one wishes a flat body after wearing it.

Moto 360 has a circular body. The strap of the watch can be replaced. The body is available in stainless steel silver and the strap of Moto 360 is available in leather. There is a news that the body of Moto 360 will soon have a Black and Rose Gold color and a silicone strap will also be accessible. Moto 360 has low bezel around the edge; thus, you should get a bigger display however a black ring bezel between the original bezel and the screen makes the body larger than display. The screen of Moto 360 is a 1.2-inch display. You would not find a ‘flat tire’ effect at the bottom of Moto 360.

The dimensions of Moto 360 are 42.8 x 42.8 x 11.68mm. Therefore, the watch is pretty thick. When the control buttons are considered, Moto 360 has two controls on the right-hand side of the smartwatch. One is a rotating crown. The rotating crown would spin with the help of your finger and scroll through different menus. There is another button to map into a number of functions. The body of Moto 360 is much light. One does not feel an overbearing presence of the smartwatch on their wrist. The lightweight of Moto 360 makes it pretty comfortable. The bottom of the body of Moto 360 is made up of plastic that saves your skin from the cold in winter, unlike metal bottom body. The strap makes you feel secure through its perforations. The watch can be buckled in any of the perforation depending on your wrist size.

Moto 360 uses an AMOLED display. The resolution being offered is of 390 x 390 pixels. The display quality of Moto 360 is superb for a smartwatch. It is very easy to view photos and run different apps on Moto 360. The colors on the display, however, could have looked better.  This flaw of Moto 360 is not very noticeable however in colorful watch face it becomes prominent. Moto 360 has an always-on display that can be knocked off for the sake of battery life but doesn’t help much though. issues

Moto 360 employs Google’s Wear OS. The smartwatch connects with Google Fit and records your activity and workouts. Through the Google Fit Workout app, one can choose usual workouts like running, biking, walking, and strength training. Some other cool activities can also be chosen such as polo, paragliding, and sand running. In addition to the Google Fit and Fit Workout you would also find  Fit Breathe app on Moto 360. The application is helpful in the exercise of breathing.

Read More: You Can Now Control Your Roku From the Apple Watch

Moto 360 is embedded with Qualcomm’s Wear 3100 chipset. The Chipset of Moto 360  manages the battery life optimizations and also the more fluid dynamic complications. Moto 360 has  1GB of on-board RAM. The watch has a storage space of 8GB. As mentioned earlier, the smartwatch employs the operating system of Google’s Wear OS. Moto 360 acts as a helper to your phone through the features of Google Fit for fitness tracking, Google Pay for NFC payment and Google Maps for navigation. The watch has an awesome notification handling functionality. The notifications are installed in a menu that is accessed through swiping up on main watch face. The messages can be responded through Google’s recommended suggestions or as ‘yes’, ‘no’ or ‘ok’ replies.

Moto 360 has a problem with its battery. The watch can work for only a day in a single full charge. For extending the battery, a Battery Saver mode is provided. The battery saver mode of Moto 360 kicks in on its own when the battery level is down. The manufacturers claim that the watch, Moto 360 can last for three days in battery saver mode.

Moto 360 is a pretty good smartwatch, with its elegant round body and perforated strap for fitness. The plastic at the bottom adds to its ease of carry in addition to its light weight. The battery life of the watch is not appreciating for a person who cannot charge it every night.