After several teases and leaks, Lamborghini has finally officially announced its all new hybrid Countach. There is a lot of meaning in the LPI 800-4 moniker. The LPI part stands for Longitudinale Posteriore Ibrido. This is a reference to not only how the powertrain is mounted, but also the fact that it is a hybrid. The 800 indicates that the vehicle is around 800 horsepower thanks to its 6.5L V12 engine + 48-volt electric motor. The vehicle is all-wheel-drive.

Also: Lamborghini Is Going to Launch Its First Fully Electric Vehicle By 2030

The Countach’s electric motor is powered by a supercapacitor that is capable of delivering three times as much current than a lithium-ion battery of the same weight. Also, the company chose to mount the electric motor directly to the transmission as to preserve the feeling of power transfer that comes from the V12 engine.

Most of the car’s chassis and exterior is composed of carbon fiber.

The LPI 800-4 .. imagines how the iconic Countach of the 70s and 80s might have evolved into an elite super sports model of this decade.The car has an 8.4-inch touchscreen display that includes full support for Apple CarPlay.

This car is going to stay rare. In fact, Lamborghini is only going to be making 112 of them. There was no price mentioned in the press release. 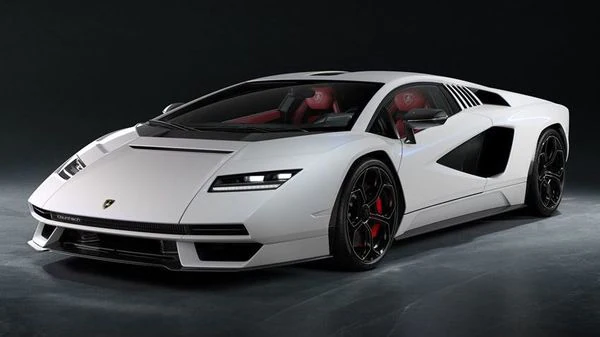