Microsoft co-founder Paul Allen’s aerospace firm, Stratolaunch, flew its massive carrier airplane named ‘Roc’ on Thursday. This was the second second time they had done so. This was, however, the company’s first flight under new ownership.

Today’s flight, at first review, has appeared extremely successful. We accomplished all test points as desired, we have not seen anything anomalous, and we are very pleased with the condition of the aircraft upon landing.

Roc reached a peak altitude of 2.6 miles over the Mojave Desert in California, Stratolaunch. The flight, which was powered by six engines, went on for three hours and 14 minutes before Roc touched down on a massive runway at the Mojave Air and Space Port.

The carrier plane’s wingspan is huge. 385 feet. That is almost twice the width of a Boeing 747. This makes Roc’s plane the world’s largest aircraft by wingspan. The aircraft is designed to carry Stratolaunch’s fully reusable, autonomous Talon-A hypersonic vehicle.

The company’s COO, Daniel Millman, said that Roc will soar higher and even faster in test flights that will be performed over the next year or so.

Stratolaunch has scaled back its operations, which has led to most staff being laid off. The company did, however, manage to keep enough employees to manage the carrier aircraft’s debut flight, which happened in April of 2019. After that, Stratolaunch went dark for over a year. Then, it eventually found new funding and rehired some of its old employees.

Roc is named after a large bird of prey in Middle Eastern mythology.

Also: New Guinness World Record: Most Drones in The Sky 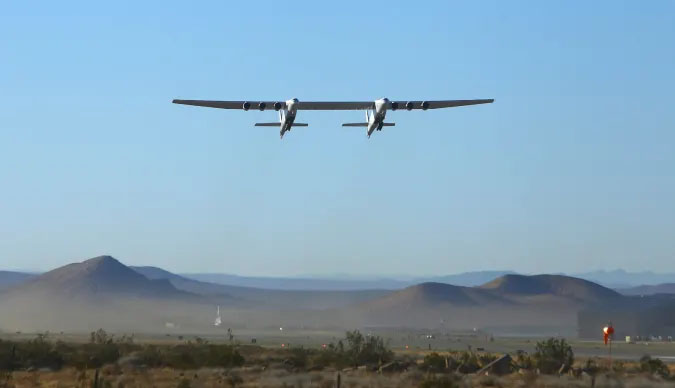