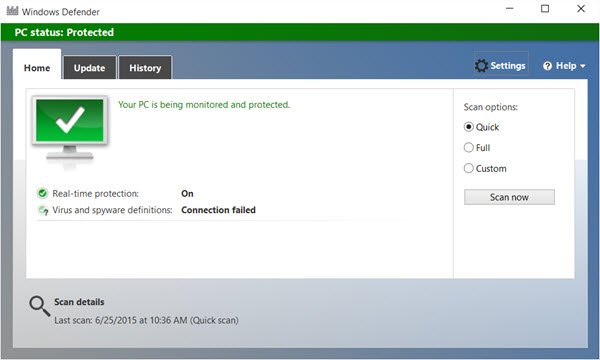 There is a say that Windows Defender from installed windows is the best protector of your computer. And to some extent people know about it too but the concerns about Windows Defender security can be demonstrated from Microsoft confirmation where it is warned that the upgrade breaks windows defender. There are industries which work on the boosting of Windows Defenders as well as test about the protection level against malware, viruses etc. to give their verdict on their protection levels which is surely a huge measure to protect PCs, laptops from the harmful effects of these viruses etc.

AV Test is one top best industry which worked out the boosting of Windows Defender and they have given it a rating relatively much better like that to Norton Defender as well as to the F-Secure Safe 17 for the protection of home antiviruses.

An optimal Solution for Windows user

The best part of Windows Defender is that here you do not have to buy another defender because it comes with the Windows itself. Upgradation of Windows Defender was itself a great news for Microsoft because Microsoft itself trying to make Windows Defender a top security master and monitor. So, they could offer a high-profile security system which could save a lot for its users where they spend a lot of money for the protection of their systems from harmful attacks from malware, viruses etc. But this did not go to the plan as it was highly expected by Microsoft.

Microsoft released the updated version of Windows Defender on 16 of September, 2019. This is giving error as it is not responding properly to both of the functions i.e. quick as well as the full scan. It is only performing to workout the scanning process for just handful files and here’s then stop working. Any user can check itself to the process as well and will be witnessing a process which takes time of at least an hour, taking place in few seconds which then stops itself. This process which was expected to run for the whole scanning proceedings, covers only few of the files and stops.

Statement from the Microsoft

Microsoft spokesman also confirmed it that it has an impact on manual or scheduled scans and they are working to solve this issue.

Concern of the Users and Microsoft

It is a great concern for Microsoft because it is currently providing protection to around 300 million around the world from the harmful attacks of malware. Moreover, this is for sure a great concern for its users cause after seeing privacy issues in Facebook and Twitter which did a huge loss to the personal information. And here they are nervous about their systems too where they can loss a lot of data even for some of their lives piece which they are taking with their selves. Users just only need to be ensured of the time taken for the scanning purposes before that update to get ensured of the security concerns they are having around after the current upgradation of Windows Defender.

They are looking for the confirmation that their systems would be safe from threats as maximum people look for the upgradations to make their systems more secure and to enjoy the new kind of exposure.

But there is also another big news from Microsoft is that they removed the error given by the update by another update. Another update which is given by Microsoft to remove the threat given by the previous update can be found in Security Intelligence Update for the Windows Defender antivirus. This resolve the issue by automatic update to the Windows Defender’s given definitions. So, it is ensured information from the Microsoft itself that the issue came in upgradation is removed by another upgradation.

But there is also a need to go for the perspective of the problem where solution might be done or its just coming on its way and we just need to see the pros from the product as well which necessarily important to have a look into. Like we see the case of Microsoft’s issue in newly upgraded Windows Defender which is also resolved in no time but there may be a case in many of the times where they will go like a campaign against Microsoft that it is all in all a bad provider of technology. This is to my point of view totally absurd. How can you say that much about some huge provider of great things in a very short period of time and millions of millions are enjoying its products around the world?

If it comes to security or a bit of obsession which has stayed in many of minds and they have taken it firmly that they will not go for the updates, this thing will also like the absurd one too with the ingredients of absolutely poor logic around in their heads. Upgradation to any of the systems in the world are always to add something even better than the previous one. Sometimes it happens that mishaps occur in the upgrading processes but still it is deniable that people are not updating their systems instead there would be a vast community around the who would have updated the new update as well.

This thing ensures that the upgradation came in a perspective that this was necessary for the protection of the system and so they did it for security concerns. Its not an easy process but its for sure that Microsoft should really do better after all those years of betterment and enhancement in their technologies.

Read Next: Google Maps incognito mode is rolling out for selective users