TCL 10 is an awesome gadget. It would be available in the market in a price of $500. The phone has a quad lens rear camera. The design of the gadget is very attractive. A chip has been dedicated for the display processing of the phone. The lite model of TLC 10 feels a little cheap. The 5G variant of the device is heavy.

TCL Plex is the first smartphone from a technology brand originated from China. The company is known well for its reasonable priced and well-equipped televisions. Though, the Plex has been designed only for the region of Europe and International Markets. It is expected that in this year TCL will broaden its horizons and deliver its first smartphones in the regions of North America.  The products will be delivered in the TCL 10 Pro, TCL 10 L and TCL 10 5G.

The release of the gadget is expected somewhere between April and June of this year as per claimed by the TCL. The phone can be bought with name of TCL in the areas of United States and Canada. The older phones by TLC have been made by TLC and licensed with the BlackBerry and Alcatel brand names. These phones were focused to be inexpensive but the TCL 10 is not a cheap gadget. The gadget would not contain a physical keyboard as well.

All phones that have been included in the TCL 10 Series will cost less than $500. The features of the phone include TCL 5G. The support for Qualcomm’s recently-unveiled Snapdragon 765 would be available in the phones. It is expected that TCL 10 5G would be the least costly 5G phone of the year 2020.

The prototypes of the non-5G models used to run latest Snapdragon 600-series silicon. But TLC could not be very specific about the elaboration of the processor that had been employed inside it.

In real, the company treats the unveiling CES 2020 as the hardware design preview. It has not been used as the formal introduction. TCL does not provide any specification sheet that could define all the features that the phone could provide to its users. Therefore, without any specification sheet, we are unable to declare all the features of the phone to you as well.

All phones of the series have four lens cameras. The sensors and the optics however differ in all of them. The primary shooter of TCL 10 5G and TCL 10 Pro both can capture great pictures with the quality of 64-mega pixel images. But the TCL 10 has a 48 MP sensor. The L in TCL 10 L stands for “LITE”. The macro lens in the tows of the phones are also expected and everything else about the camera of the phones is a mystery.

TCL has concentrated on the display side of the phone. The main priority of the TCL perhaps is the display. The company is well known for the televisions that they make. Therefore, the phones are expected to be equipped with technology that carries great display features. A chip has been dedicated for the display. The chip is responsible for running the TCL’s Nxtvision engine. The TCL’s Nxtvision engine can convert content from SDR to HDR. The color and fidelity of multimedia can also be improved. The LCD panels that have been utilized in the TCL 10 L and TCL 10 5G looks great and like the one that have been made for the midrange phones.

The TCL 10 Pro is undoubtedly the nicest phone of the series. The phone is very comfortable to hold and for the eyes its look is great. The phone has physical features of slim bezels, curved display and in-display fingerprint reader. The glossier finish of the rear glass has been shared by the TCL 10 L and TCL 10 5G. The subtle polygonal pattern on the 5G model has been encased in a chrome frame feels like plastic made and cheap. The phones have old fashioned capacitive fingerprint scanners. The sensors are located at the back of the phone. But the optical scanner in Pro version is located in the display. The 5G device is a wide, tall and noticeable heavy gadget. The phone can accommodate a large battery. The battery can keep the power thirsty modem of the phone to hum along.

The TCL will update the world about its phone products at the Mobile World Congress 2020 in Barcelona the Congress is expected to hold on February 24. In the Congress, we expect to get the detailed specifications, prices and information on the carrier availability in the United States. 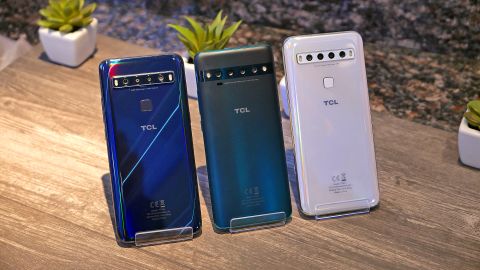