Thermal management is a crucial component of any video game system. Sony showed a video tear-down of the PlayStation 5 that revealed a 120mm fan that directs air into both sides of the motherboard. Now, Sony is telling us that it’s going to optimize the fan speed based on an individual game’s needs. During an interview with 4Gamer.net, Yasuhiro Ootori explained that the PS5 will monitor temperatures through sensors inside the console. One of the sensors is directly inside the APU (Accelerated Processing Unit). Three more sensors are installed on the motherboard. The sensors that detect the highest value then used to control the fan’s speed.

Various games will be released in the future, and data on the APU’s behavior in each game will be collected. We have a plan to optimize the fan control based on this data.

The Sony PS5’s fan has a software-controlled maximum speed. This speed, however, can be increased if the system is struggling.

This fan optimization will be delivered with a software update. Console gamers are accustomed to firmware updates that add new features to the system. This, however, is an update that changes (increases) the physical performance of the hardware? That’s nice.

Otori addressed a handful of questions that people have had since Sony’s teardown video showed up. To start, he confirmed that the console’s orientation, either vertical or horizontal, won’t affect the performance of the cooling system. Then, Otori keyed us in on the fact that the Sony PS5’s internal SSD enclosure has ventilation holes to assist with the removal of heat from user-added drives. 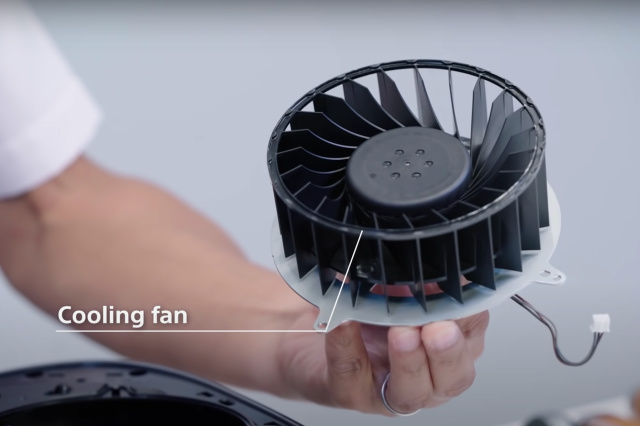