New pro-grade GPUs are coming out. The graphics titan, nVidia now has a new a solution for professionals. So, that’s a good thing. There are a lot of computer-based professionals that have been wanting to use nVidia’s new Ampere architecture. These cards are extremely powerful. The GeForce RTX A6000 and A40 are Team Green’s latest pair of powerful cards. These new GPUs easily out-perform the $1,499 RTX 3090 as they have 10,752 CUDA cores and 48GB of VRAM! These new chips are the successors to the GeForce RTX 8000 and 6000 Quadro cards, therefor, you may want to hold off on that new CGPU purchase. This is worth waiting for. We aren’t sure why nVidia is dropping the Quadro branding. Sometimes people need to be herded into doing the smart thing. This is probably a branding stunts to help convince the uninformed masses to make good choices. It be like that sometimes.

We still don’t know anything about clock speeds. nVidia has not said anything about that yet. These pro-grade GPUs are going to be really fast, though. They are basically super-powered version of the RTX 3080 and 3090 flagships. These new cards share the same GA102 GPU as their consumer variants. They are identical compared to each other in most areas. The only differences are that the A40 has a passive cooler and slower 14.5 Gbps PER PIN memory. Also, these cars run the slower GDDR6 RAM, rather than GDDR6X like the consumer cards use.

The absolute very last thing that anyone needs to know when they are trying to find out how fast a memory sub-system is, is the memory chips per-pin memory speeds. My guess is that some popular reviewer or otherwise equally influential individual was looking at a spec sheet or presentation slide provided by one day and they say a memory speed figure in the double digit Gbps range. In the above paragraph, I had to unfortunately use this expression. Thats why I used ‘PER PIN’ in all caps. This way of explaining memory performance is popular right now for some totally outrageous non-nonsensical reason. To know how fast memory is based on that figure, you have to know how many memory modules are on the board and how many pins each module uses for data. Yea. Super intuitive, I know. Rant over.

These are not consumer-oriented cards. They are made for professionals that need a lot of GPU power. For them, these pro-grade GPUs are perfect. The A40 is a great choice for dense servers, and it includes three DisplayPort connections. Previous passively cooled cards were meant for head-less compute tasks. They didn’t have any video connections at all. According to nVidia, the RTX A6000 will be available by mid-December, and the A40 will arrive sometime in early 2021. 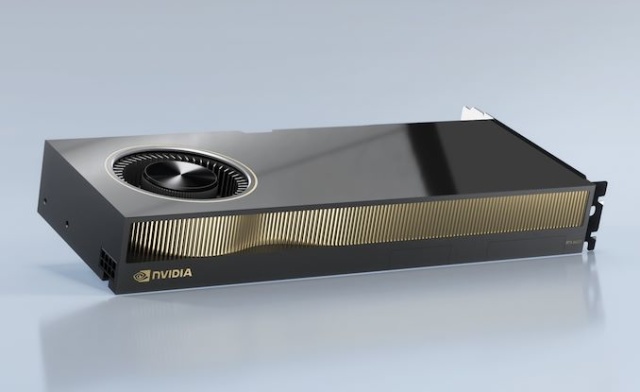