The leading Chinese smartphone makers like Oppo and Vivo has successfully developed a bezel-less designed smartphone. Oppo’s Find X and Vivo’s NEX has managed to captured immense popularity in just a few days. But on the other side, big smartphones companies like Apple and Huawei are still struggling to come out with the pure bezel-less design. Oppo has given some innovative and unique designs to smartphone users. When it launched its Find X smartphone, it brings a revolution in the smartphone market across the world. It has increased the scale of the innovation to high.  The Oppo Find X carries a retractable top which houses its front camera and other sensors. The device is for now only launched in China. Now it seems that Samsung is gearing up to introduce a new and innovative smartphone.

Samsung is well-known for its innovative smartphone designs. If the latest leaked design is true, then Samsung might be planning to take some stunning design concept going ahead.  As per the sources, Samsung has submitted a new concept design of the Galaxy smartphone to the US Patent and Trademark Office.  The leaked patent has suggested that Samsung might soon develop a smartphone which will come with a bezel-less design. There is no sign of display notch. The patent also revealed that the device would carry a secondary display on the rear side. However, it is not clear that the rectangular block located on the rear of the device is a display or not. The concept design images show the smartphone will not carry fingerprint sensor or a headphone jack. This is quite disappointing.

Now coming to its front, on the front the smartphone carries very thin bezel on the top side. The bezel houses its front camera and other sensors. However, there is no bezel on the bottom of the smartphone. The concept clearly shows that there is single lens rear camera setup which is located on the top-left corner of the device. Well, this is something very strange as Samsung has never used such setup on its flagship smartphone.  On the right side of the device, there is a volume rocker and power key. The device may carry dual speaker as on the bottom there are two speaker grilles. The smartphone supports the USB Type-C charging port.  The speaker grilles on both sides of the USB Type-C port.

However, some rumours have stated that Samsung may implement the in-display fingerprint scanner on the secondary display which is located on the rear side. In many cases, it has been seen that the patent designs don’t always turn out to be a real product. But Samsung has been provided smartphones carrying some unique designs and features. So, Samsung may come up with such type of device.

It may be noted that on 24th August, Samsung filed smartphone design patent which was approved by World Intellectual Property Office on 21st June. The patent shows that the display will have four strips which can be made from any material like aluminium, metal and means of magnets can attach patterned wood and those frames. 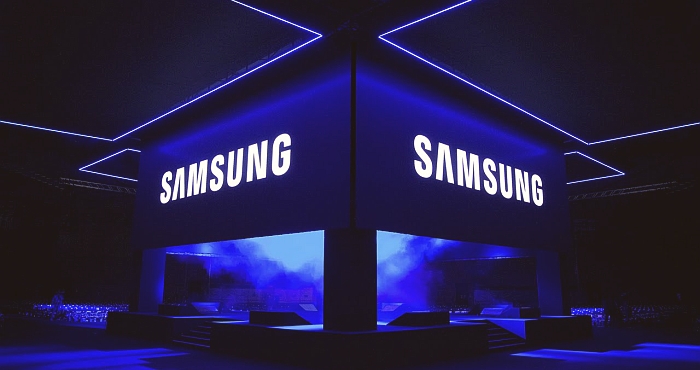