Spot, the Boston Dynamics robot, was tested by the French army during training sessions at a military school in France. The robot was used during a short, two-day training session. The goal was ‘measuring the added value of robots in combat action.’

The main purpose of the exercises were to get students thinking about how robots can be field-deployed in combat scenarios. Three offensive and defensive missions were designed. Spot was primarily used for reconnaissance.

The training scenarios were performed by students on their own without the assistance of the robots. After that, the students implemented their robotic designs. There were other bots deployed as well, one was a remote-controlled vehicle called the OPTIO-X20 that resembled a tank. It was fitted with a cannon.

According to the study, robots slowed the operation down but overall, kept troops safer. In fact, in one of the exercises, one of the soldiers would have died had it not been for Spot. Battery life was a problem. Spot died in the middle of an exercise.

The European distributor, Shark Robotics and Nexter Group, loaned the robots to the students for the training exercise. Boston Robotics, Spot manufacturer, was not involved in the deployment.

In their early stages, the US military’s DARPA funded some of Boston Dynamics’ early robots. Since then, the company has slowly moved away from its military contracts.

Now, Boston Dynamics current terms and conditions prevent its robots from being used to ‘to harm or intimidate any person or animal, as a weapon, or to enable any weapon.’ 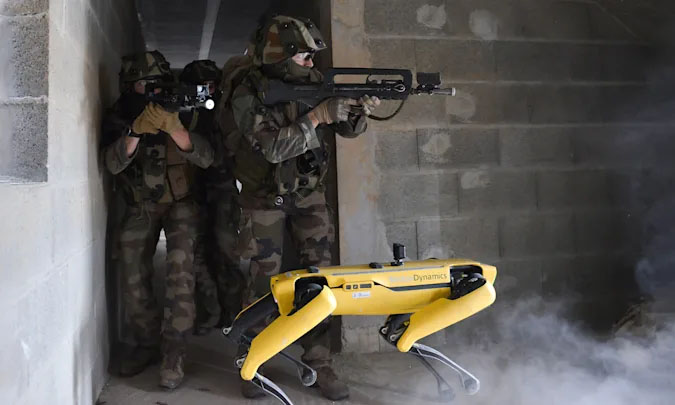