Boeing has a long way to go before Starliner can make its second journey and reach the ISS (International Space Station). It did, however, make a leap in that direction. Boeings most recent Starliner test focused the spacecraft’s parachute reliability. Boeing wanted to confirm that Starliner’s parachute system can deploy correctly in less-than-ideal environmental conditions. The aerospace heavy-weight’s prerogative was to make sure that Starliner’s parachutes would properly inflate, even in an early-launch-abort.

“Parachutes like clean air flow. They inflate predictably under a wide range of conditions, but in certain ascent aborts, you are deploying these parachutes into more unsteady air where proper inflation becomes less predictable. We wanted to test the inflation characteristics at low dynamic pressure so we can be completely confident in the system we developed.”

As is the case with many aerospace tests, Boeing also added a simulated failure that prevented one of Starliner’s three main parachutes from opening. Still, though, the Starliner test vehicle landed safely about 2.5 minutes later, even with a non-functional parachute. This made the test a resounding success. Now, Boeing will use the data it fathered to further improve Starliner’s parachute reliability. This is essential testing for manned flights. As part of the contract terms, NASA will also get access to Boeing’s test data so that it may improve the agency’s own vehicles.

Boeing’s Starliner is one of the few commercial vehicles that are designed to ferry astronauts into space from US soil. These trips will happen along with SpaceX‘s Crew Dragon launches. Boeing unfortunately was not able to make it to the ISS during its previous test-flight back in December. This failure was the result of being unable to achieve the proper orbit. The post-failure investigation showed that Boeing failed to perform complete end-to-end tests on the spacecraft. If they had done so, it would have revealed flaws that prevented Starliner from reaching the appropriate orbit. NASA has given Boeing the green light to fly another unmanned flight, but a launch date has yet to be set. 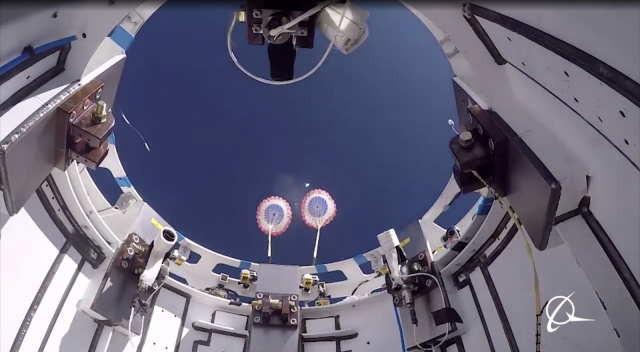