Parrot Disco: Many consumer-level drones are either quadcopters or hexacopters on the market at this stage: UAVs with several rotors for vertical launch and landing. Since their first AR. Drone in 2010, Parrot had been making them till last year. But Parrot chose to take it in the different direction with the Disco: a fixed-wing aerial unmanned aircraft (UAV), which operates in very different ways.

Parrot’s pedigree is not without precedent in this field, since in recent years the company has made fixed-wing drones for commercial and farm use. However it was not made for farmers or surveyors, particularly for drone enthusiasts, aficionados, and everybody between them, and so we took it up into the sky to see how the regular quadcopter is being stacked up.

In August, we had a nice time with the Disco in Palm Springs, which was flew nearby by Parrot officials in a more controlled environment. At the time, we discussed the mechanics of the drone, but here is a fast analysis. The 1,6-pound body is made of expanded polypropylene (EPP) foam and carbon tubing for reinforcement with a range of 45-inch wingspan and a depth of 22-inch. There is a single propeller in the rear to lift it, with tips on the wings that stick out to help steer.

This uses the same Parrot 14-megapixel camera for Bebop 2, although it boosts the image quality with a range of software improvements. The C.H.U.C.K (Control Hub and Universal Computer Kit), which includes a 2 700 mAh battery connector, is connected to the electronic panel. Including ram expansion options, 32 GB internal capacity is available on board. There is also a micro-USB port for direct PC and Mac connectivity–but only for sharing content, not for charging. The measuring equipment on board includes radar, altimeter, video, and speed sensors. The battery has a wall outlet-induced adapter. The internal navigation system consists of a 3-axis gyroscope, accelerometer, magnetometer and GPS.

The Disco comes in the new headset of CockpitGlasses and SkyController 2. The controller is slightly smaller in size than its ancestor, which allows storage and transfer and tends to last longer per charge (the device has its own rechargeable battery inside). The headset is the same as those used by smartphones to show 360 degrees of content. The most popular models are in Parrot’s list of compatible handsets, but unofficially, almost any iOS or Android smartphone can operate between 4.7 and 5.5 inch screen sizes. The FreeFlight Pro software, updated and revamped, controls and checks the setup process.

Parrot does not use its own proprietary wireless signal, unlike DJI and Yuneec, preferring to use Wi-Fi in the 2.4 GHz and 5.0 GHz bands. The new controller seems to provide a stronger connection, but unfortunately the range that we have found during our flight is small.

As we found in the previous trial, it took just a few minutes to assemble the Parrot Disco. To fly, it needed to be turned on using a power button, the FreeFlight Pro app (iOS) and SkyController 2 are connected to Wi-Fi (which detects the drone itself). At first, we had odd problems connecting the controller. It seemed like killing and restarting the app worked, but it happened more than once.

The controller has a mobile device slot and holder which holds the monitor and software for adjustments or capturing and shooting of images. The app shows a live view of the camera of the Disco, close to other drones.

The app offers you the ability to personalize the controller setup before flight. The flight mode, by design, is “Flat Trim,” the best choice to launch.

The easiest part was to take forward Takeoff. Once the motor went up and down, we had to toss it like a Frisbee, and when the momentum had come to an end, we had to go on our own. The engine started. This is remarkable for the sensors inside. We have even tried to throw it backwards to find out if it can correctly refocus itself, and completely, automatically and as usual.

Disco can ascend to 50 meters (164 feet), followed by a loiter mode pattern, which flies continuously in circles of 196-foot diameter, until they are manually hit on either joystick with a simple click in any direction. The thruster on the left joystick will accelerate the drone up to 50 mph, so that it is quickly removed, so that we decided to only use the drone for small bursts, especially while climbing or descending. Please note, that in the FreeFlight Pro program, the radius and altitude of Loiter can be adjusted by sliders.

The Parrot Disco can be technically 1.2 kilometers, and slightly less than 500 feet high, to adherence to FAA rules. We were able to get it to 1,500 feet away, but it was easy to lose sight of it without being in an elevated position, prompting us to click the Return Home button in the machine to bring it closer to where it first took off. That is why we have to keep the maximum distance because it seemed inadequate if there was no wide area without any obstacles. The geophysical design of the box in is already disabled by default and toggling eliminates the distance constraints.

As we noted when we saw the Disco first, it flies like a plane with a fixed wing configuration-it always goes ahead. Quadcopters can fly lateral and reverse 360-degrees. The loiter mode was the only possible way to turn the disk on autopilot and adjust the settings or to determine where to go next. The loiter mode was a very good way.

The intensive need for observing the Disk made the attention involved more difficult to ride. Were we too small in the direction of those trees? Could we trust the camera view to manually bring the drone in focus? What were the chances of a bird taking a drone shot?

The learning curve for manipulating the basic motions of the Disco was quite easy, but it takes time to use the controls to power them. For dense traffic and parking spots, we enjoy learning how to balance a new car. The more you know the vehicle the more physically you are aware of and how collisions can be avoided. We wrecked the Disco a couple times, mistiming the angle of turn and upward direction, or misjudging it.

If you fly a drone for the first time, collisions are fairly normal, but quadcopters will change the direction at least if the pilot moves quickly enough. It must be done sooner in case of Disco because it cannot suddenly move at a 90 degree angle or stop in the middle of flight.

It was really cool to fly in FPV with the headset. The feeling of being in a cockpit improved when we could see what the drone does real. Resolution is not the sharpest, because it’s goes through a phone, but we didn’t really care. The rear cameras of your phone used to move to “see through” mode and show us the real world to get out of FPV mode. The 250ms delay made things look as if they were in slow motion, but it was odd.

The Parrot Disco starts recording video immediately when it is connected, and this does not require manual pressing. Footage at 1080p HD is pretty good. There is no physical change to the image sensor and lens as Bebop 2, but some tuning applications seem to have made the auto balance adapt more easily. Quality is not good in low light, but it doesn’t matter because it’s a drone that flies in less visible way.

The internal storage space is well calculated at 32 GB, and you can always access files on spot via the Wi-Fi on your phone or tablet. Or you can pass them to PC or Mac via the micro-USB port (optional to erase them directly afterwards from internal storage).

The battery life has been much better than any current quadcopter. For a total of 47 minutes, we flew the Disco over one cargo consisting of five offs and landings and captured videos in several stages. Wind conditions do affect it, and we know it is an average number, but in perfect conditions, even quadcopters cannot do half of this time.

Parrot provides one year warranty and a 15-day return policy on direct purchases. “Service and support” is offered by Parrot. Retailers’ revenues apply to a return policy which may or may not reflect Parrot’s policies.

The Parrot Disco is very well crafted and flies fine, but its drawbacks are also hampered. It does not fly in the same acute angle, like a quadcopter does, as a fixed-wing drone without landing gear. On the other hand, it moves really well and, because of its rapid forward motion, the picture obviously seems more dramatic.

Where to go is the challenge. The best choices are parks and wide, open grasslands, since they are obviously not built to fly near buildings or humans. Quadcopters have the benefit of being able to ride or just float through denser areas slowly, making it easier for you to take a picture or a video in advance. You cannot fly it anywhere with the Disco or fly with independent movie modes like cable cam or Orbit— which restrict the kind of video you can take. 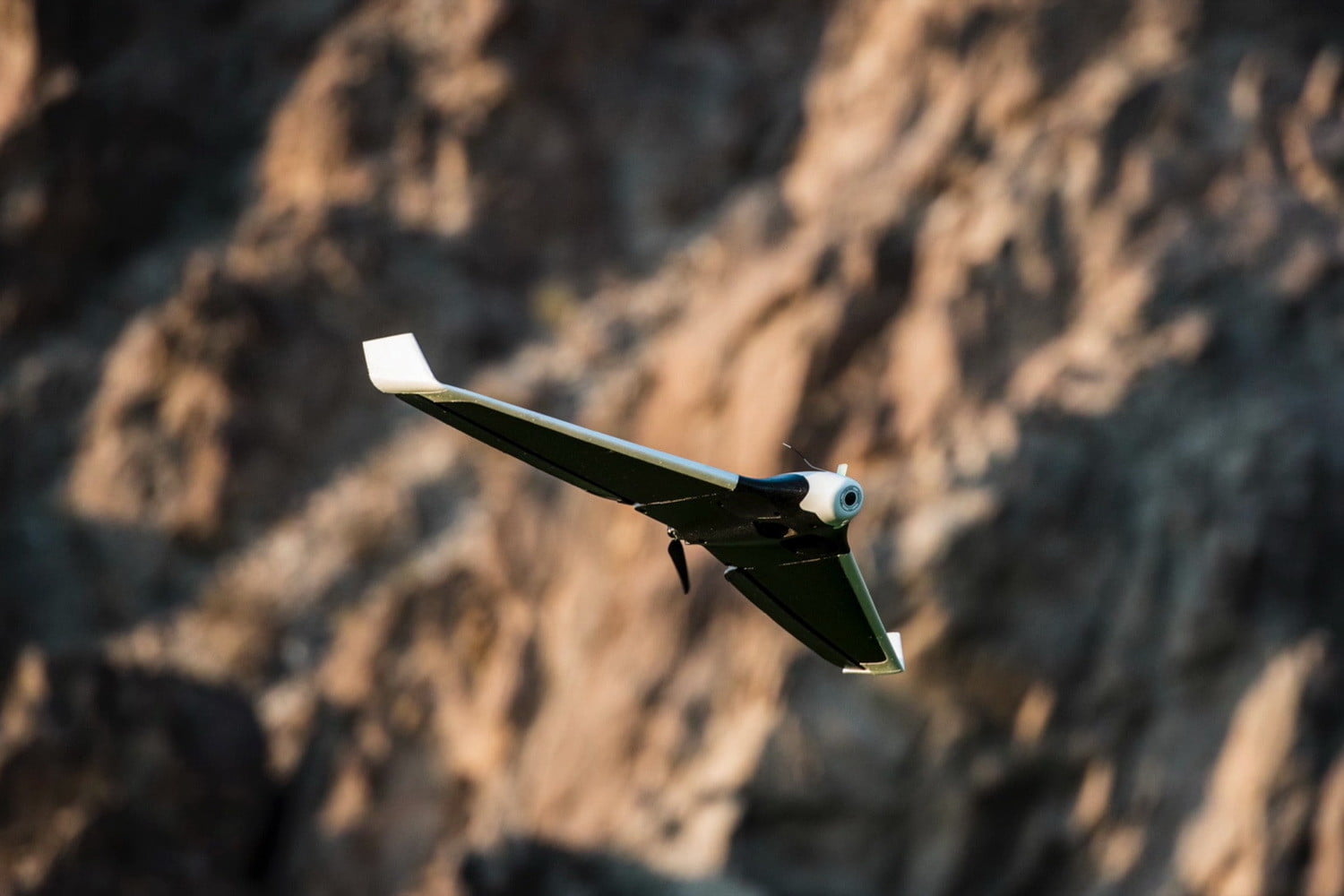