NASA has flown its four-pound helicopter on the surface of the Red Planet this morning. This was the very first powered flight of an aircraft on another planet. This is comparable to the Wright brothers first flight in 1903.

At around 3:30 AM, the carbon-fiber rotor blades started spinning. Then, Ingenuity took off from the Martian surface. The drone reached an altitude of only around 10 feet. There, it hovered in place for a bit before turning around to softly landed autonomously. The flight lasted 30 seconds.

The flight operations center at NASA’s Jet Propulsion Laboratory is where engineers broke into applause after their confirmation that the flight. It took 3 hours to get confirmation on account of the fact that the data was sent from 178 million miles away

The room turned giddy when a picture from the helicopter captured its own shadow on the ground. Then, a video of the aircraft’s flight came through the flight control systems. This data was sent through a complex network of communications. The signal had to hop from the helicopter to the rover, then to the Mars orbiter, and then it’s sent to NASA’s Deep Space Network, which is a massive international network of antennas. After that, it’s sent off to JPL (Jet Propulsion Laboratory)

We can now say we’ve flown a rotorcraft on another planet. We together flew on Mars. We together have our Wright brothers moment. We don’t know from history what Orville and Wilbur Wright did after their first successful flight. But I imagine the two brothers hugged each other. Well, you know, I’m hugging you virtually.

This test will eventually help NASA quickly move about the surface of Mars while it looks for signs of life.

It opens up new doors to scout ahead is just absolutely critical.

Ingenuity overcame Mars’s ultra-thin atmosphere, which is only 1 percent of Earth’s. This makes it much more difficult for the helicopters’ blades to generate lift. That’s why they have to spin at a mind-boggling 2500 RPM.

Ingenuity, which has four spindly legs and a solar panel, cost about $80 million dollars to manufacture. The spacecraft made the perilous journey to Mars packed away inside the rover’s undercarriage

Ingenuity has a postage-sized piece of fabric from the Wright brothers’ aircraft. It’s known as the Flyer and it’s attached to a cable under the solar panel.

If all goes as planned, the helicopter is going to make five more flights in coming weeks. Each one of the flights is going to be more ambitious than the one before it.

Aung has told her team to celebrate and enjoy the moment. But she added that, ‘This is just a first flight. Let’s get back to work and have more flights.’

Originally, the flight was scheduled to happen last week. During a test of the helicopter’s rotors, however, a problem was noticed that prevented it from being completed.

Engineers at JPL were fortunately able to diagnose the problem. The team was confident that they found a solution . Going into the flight Monday, though, something as difficult as the problem at hand could easily cause more issues.

We’re doing everything we can to make it a success, but we also know that we may have to scrub and try again. In engineering, there is always uncertainty, but this is what makes working on advanced technology so exciting and rewarding. 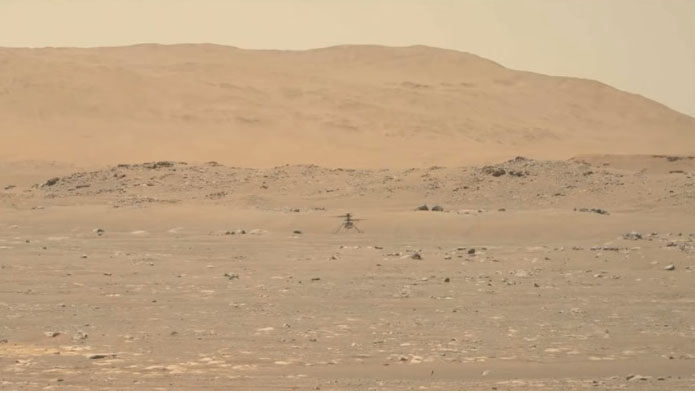