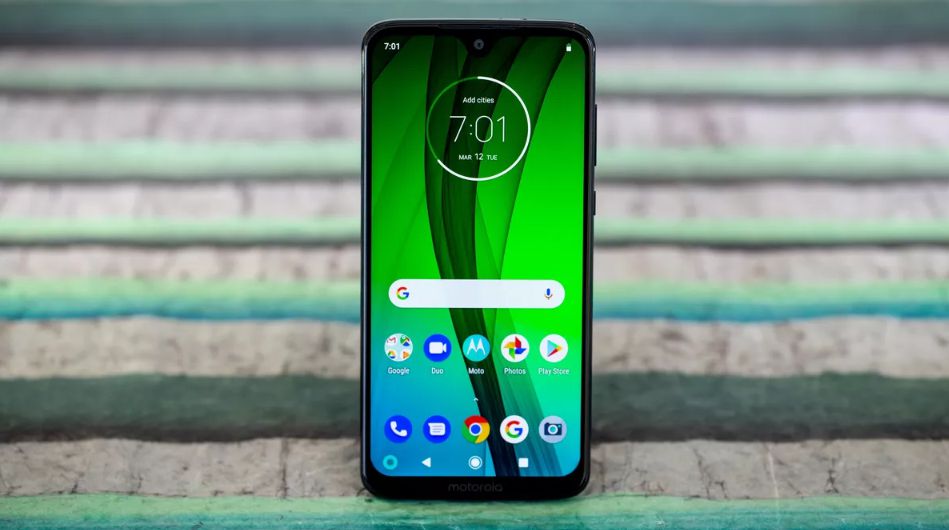 Are you looking for a budget-friendly phone with a look of an expensive phone? Moto G7 is an affordable phone with quite decent specs. This phone offers much more in the price you are paying for it. Motorola has launched its Moto G7 series in February 2019. Moto G7 has an amazing display. As compared to the previous phones by Motorola this G7 series includes  Moto G7, Moto G7 Play, Moto G7 power, and Moto G7 plus. Moto G7 is included in the best budget-friendly phone due to its performance.

The price of the Moto G7 is $299 which is very reasonable. As compared to the Moto G6 its price has only increased $50 which can be justified because of the features. Secondly, its storage is more as compared to the previous one, Moto G6. In the United Kingdom, it costs £239 while in Australia it is sold at $399. Moto G7 will be sold through Google Fi. One should by his Moto G7 directly from Motorola or other online retailers like Amazon, B&H or Best Buy.

Moto G7 has a water repellent technology note that not water-resistant this means you can use it during rain. The power button, as well as the volume button, are on the right side of the phone.

The coolest thing about this phone is that it seems an expensive phone while holding it because unlike the previous models  Motorola has invested in the material this time. Metal body and glass cover say it all.

Moto G7 comes with a dual-camera on the back. One is a 12 MegaPixel camera and the other one is a 5 Megapixel depth sensor. The front selfie camera is 8 Mega Pixel. It has a large aperture of f/1.8.

You can take striking photos using photo software. The front camera enables you to take good pictures even in low light using the screen flash that is automatically enabled in low light.

Moto G7 has introduced high-resolution zoom which maintains the clarity of images that are usually lost while zooming in. It takes a clear, detailed photo even when the person or object is far from the phone.

Ai camera allows you to take next-level photos, this technology automatically captures the photos when everyone is smiling.

Moto G7 has a battery life of 3000 mAh that lasts for a whole day. The battery of this phone isn’t much bigger but with normal use, it can last the whole day. Its battery has the same capacity as the Moto G6.

Additionally, Moto G7 comes with a 15W Turbo Power adapter that according to Motorola provides 9 hours of battery by charging for just 15 minutes which is perfect.

Moto G7 comes with Qualcomm Snapdragon 632 Octa-core Processor. According to Motorola Moto G7 has a 50% faster processor as compared to the previous generation. Moto G7 runs on Android 9 Pie.

It has 4GB RAM and 64 internal storage which is a good amount of storage in this price. It also supports 512 microSD card. It gives a good and smooth gaming experience.

NFC that is a standard feature in most of the phones is not present in Moto G7 so that means you will be unable to make an online payment using Moto G7.

Overall Moto G7 is a perfect smartphone with dual rear camera, 4GB RAM, a faster processor, face recognition and much more in just $300. Motorola has always maintained the standard in a low budget. G7 is one of the rare cell phones that offers all of these features at a low price. So if you want a decent phone in a handsome amount of money this should be your pick.

Ask any questions you might have regarding this phone in the comment section below. We will surely answer your queries as soon as we receive them.