You won’t have to wait for Volkswagen’s ‘ID Buzz’ to get your hands on an electric microbus. A German corporation called ‘Electric Brands’ is working on a VW Bus-inspired Electric Vehicle named the ‘eBussy.’ There is, however, more than meets the eye. eBussy is a modular, fully configurable EV platform. eBussy has 10 different body styles that you can set it up with. This flexible design allows the EV take on many useful forms, some of which include a pickup truck, flatbed truck, minivan, or camper.

Another cool feature is the ability to slide the steering wheel across the dashboard. That’s right, you can easily reconfigure this vehicle to be right or left-hand drive. In fact, you can even put the steering wheel in the middle of you want. This is possible because all of eBussy’s systems are drive-by-wire. This means that there isn’t a mechanical linkage in between the drivers controls and the systems they are controlling, such as the steering and throttle. eBussy has a 10kWh battery that provides range of about 120 miles (~193 km). It’s got roof-mounted solar panels and a regenerative braking system. Those two features are designed to extend the range of the vehicle. A 30kWh battery is available as an upgrade option, allowing eBussy to travel just under 400 miles on a single charge. eBussy’s electric motors produce only around 20 horsepower but an astonishing 737 pound-feet of torque. Depending on how it’s configured, the EV will weigh between around 1000 pounds and 1,300 pounds.

The entry-level eBussy will set you back $18,525, while its most expensive configuration, the off-road camper, costs $33,309. Electric Brands is planning on rolling out a network of charging / battery swap stations. At these locations, eBussy owners will be able to either charge their battery or exchange it for a fully charged one. If everyone goes the way the company wants it to, eBussy will show up on European roads sometime in 2021. We have not heard if they are bringing a model to the United States just yet, but considering how easy it is to reconfigure the vehicle, I don’t see why not. 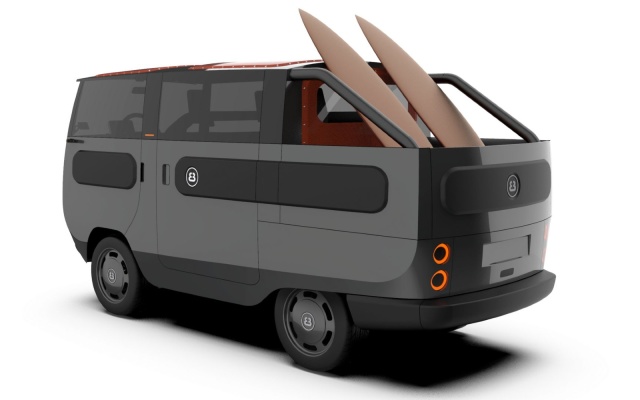