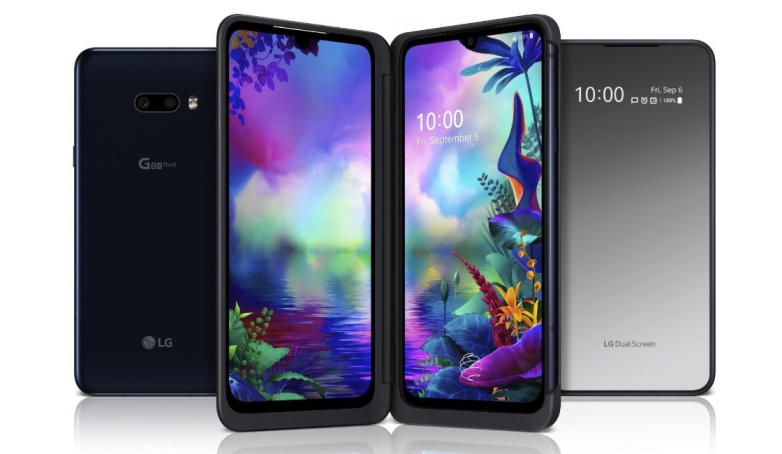 LG G8X THINQ Dual Screen is a great choice for the person who wants to do multiple tasks at a time on his phone in a price that is just reasonable. The phone allows the user to use dual screen with the freedom of detaching one in a price much less than that of Galaxy Fold. The display, camera and processor all are pretty appreciating. The specifications of the LG G8X are discussed in details below:

The G8X is an actual smartphone. The back panel of the phone is Aurora Black colored. There is a pair of cameras at the back and the front side is only screen with only a tear drop camera. The right side of the phone is occupied by the volume and digital assistant buttons while you can find the power button on the left side. The phone has a headphone jack and USB Type-C port at the bottom of the phone.

The LG G8X has 2 detachable screens. The dual screens are actually the main revolution being introduced through this phone. The LG G8X is a 6.4 inches smartphone along with a similar sized 2nd OLED screen in the box. The screens get attached side by side and therefore unlike Galaxy Fold which provides smooth tablet display on dual screen, the LG G8X has a gap between two screens in expanded view. The additional screen is fixed in a cover, that is why it is named as Cover Display. Both the screens can be rotated about 180 degrees giving the user extreme freedom in the domain of display.

The screens allow the user to do more at once and multi-task like never before. The user can use the dual screen in endless ways like he may text his friend while a video is being played or he may update his football team and in the meantime research stats. He may do all this without the need of going  back and forth between different apps. While playing games the user can view of the game on the main screen and get a customized controller for the game on the other.

The LG G8X has 2 screen that can be detached, thus giving the user freedom to choose through the power of two screens. If the user wants to go minimal, he can simply detach the second screen and get a slim, light phone. Using the LG G8X the user may choose to go with slim and light phone or great multitasking gadget.

In addition to the main smartphone screen and the second display there is a 2.1 inches notification screen on the backside of the second screen that allows you to get notified about notifications when both the screens are attached and enclosed.

Case of the second screen:

The second screen has been wrapped through a case in order to provide a physical connection with the first smartphone display as the wireless connection between the displays would not have be sufficient for the experience that the company would have wanted to provide its users with when the gaming platform is considered. The case has a C Type USB Port in it, when the smartphone is put into the case, it gets connected to the first display via that cable that is a physical and stronger connection than any wireless connection like Bluetooth.

The LG G8X has been powered by the Qualcomm Snapdragon 855 processor. The phone runs on Android 9.0(pie) with 6GB RAM and 128 GB onboard storage which can be extended via the microSD card slot.

The LG G8X is not much heavy without second screen. It has a weight of 6.8 ounces on its own, which is not difficult to lift and carry. Considering the single screen, the phone is quite smart, slim and light. The second screen makes the phone 4.7 ounces heavier than the original smartphone. Thus, the performance is increased at the cost of some weight.

The LG G8X gets unlocked through the touch of a finger that means that the phone has a fingerprint scanner in display. Thus, the phone is quite personal providing its users with great sense of privacy.

The phone is Quick Charge 4.0 capable and thus does not take too long to charge.

The LG G8X has stereo sound system, the phone has two speakers, one at bottom left and other at bottom right. The sound quality if pretty good.

The LG G8X has a rear mounted camera of 12 MP that is a standard shooter and clicks great pictures. The phone is a 2nd generation mobile phone of LG and the company has designed it after correcting their flaws they heard through feedback of their other products.

The LG G8X has wide camera lens that captures pictures at 136 degrees that are ideal for capturing epic vistas and group shots.

The LG has put a powerful camera at the front of this phone. The LG G8X level ups the selfie game with its 32 MP front camera for pixel level detail and 4x zoon power.

Read Next: Google Pixel 4 Took The Market With Its Latest Qi Wireless Charging