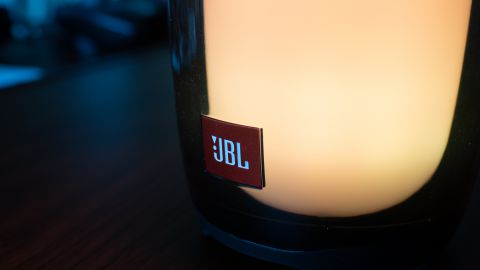 JBL Pulse 4, newly launched version is amazing unlike previous versions. Of course, it looks rather costly with a $199.95 price, but offers powerful audio performance irrespective of size and enhanced LED lighting, which shows hypnotic light show at boundaries of speaker.

The rounded cylindrical construction of the Pulse 4 measures 3.8 inches in round and 8.2 inches in height. It’s heavier at 2.8 pounds than the normal phone speaker. There two color models available: white and black. But of course, the real star of the show is the LED panel inside the speaker’s box.

A sonic machine is projected out of the top grille from a single 2.25-inch, 20-Watt driver. A passive radiator is mounted on the floor of the base panel with a speaker standing upright. The whole structure has an outstanding IPX7 score, which ensures that it can be watered up to one meter, to be used outdoors and/or by the pool.

The top loop of the speaker features multiple keys, including power buttons, Bluetooth pairing, up/down volume and play/pause. The LED lights are also controlled by a button and the PartyBoost button connects the speaker to other Pulse 4s, forming either a stereo pair or a multi-room system (up to 100 speakers). Foe charging, USB Type-C is available at bottom.

The Pulse 4 does not have a speakerphone system that is surprising because of its size and lightweight structure. You would manually handles calls on mobiles. You can only send audio to it, but there’s no aux input as well. Obviously, in the development of the IPX7, this exclusion helps, but some users will be annoyed by it.

The JBL Connect app lets you turn the speaker on PartyBoost mode, control LED lights, or place it in the Stereo mode. JBL reports the life of the battery to be approximately 12 hours, but the results vary with size and LED use.

The light show Pulse 4 is amazing, even for gimmicks. Colors blend together and fluidly merge in each other. Though the audio doesn’t always match what you see, it’s fun–steamy, the colors are a mix of neon and pastels, glowing and changing constantly.

There are several patterns. The coolest thing about light show is that it looks like a combination of bright Adidas colors and animated on the bottom of a Rothko drawing. Some patterns feature miniscule dance dots that scatter, rejoin, and change direction, and look like a Visual EQ that dances at the tempo and is blurred for effect.

In short, I’ve been watching the LED light show for quite a while for the first time, impressed by the work that have been done. It sometimes looks cool and even sumptuous. Shaking the speaker will allow it toggling color palettes and pushing the Light button will switch between patterns (it also synchronize light with other nearby Pulse 4 speakers). Pulse 4 makes me wonder if people will buy this for the colors.

Read More: Get Your Amazon’s Echo Dot At The Best Deal Ever

The quality of the audio is great for a mono-speaker. The speaker reproduces a compelling low-frequency range on tracks with an extreme sub-bass material such as the Knife’s “Silent Shout.” The passive radiator helps obviously, but for a speaker of this size, it is a strong bass forward sound.

The song with a far less deep bass in the mix “Drover” from Bill Callahan gives us a better feel of the general sound of Pulse 4. The drums gain a certain amount of oomph in the bass department, with a little more complexity and scope in Callahan’s baritone voice. If the low and high speakers were not dialed up and carved, it would sound messy. This is clearly not a sound for purists but the lower and high ones are improved to the same degree, so that through sculpting, things are equilibrated.

The kick drum loop is introduced on Jay-Z and Kanye West’s “No Church in the Wild,” which allows the spell to maintain its stinginess in the mix. The sub-bass hits that mark the beat and have a good range for a speaker of this size but we finally hear the limits of pulse 4. The frequencies of these sub-basses cannot be as small as those, and we get something of its portentous strength. The vowels are delivered clean and simply, but thanks to the high frequency sculpture, there is some additional sibilance. The result is a crisp, bright sound with a strong bass depth and a hint that there’s sub-bass (but nothing like a subwoofer).

Orchestra-like tracks like “The Gospel According to the Other Mary” from the opening scene by John Adams sound relatively balanced in spite of lower and high boosts. The instrumentation in the lower register is not guided far in the mix and its bright commanding presence still maintains high recorded brass, strings and vocals even though the mono output is removed from the recording.

Finally, the JBL Pulse 4 is a waterproof, portable and average size speaker. For a little more, we liked the $150 for Sony SRS-XB32 and $150 JBL Charge 4, both of which offer different grades of audio and outdoor comfort–the Sony model also has (much more modest) LEDs. Nevertheless, if you’re here for the hypnotic, artisanal LED light show, it will be difficult for you to find the audio experience in combination with that of Pulse 4.