Google Fi combines the best of three networks. T-Mobile, Sprint, and US Cellular. This, of course, will be changing with the finalization of T-mobile’s purchase of Sprint. Google Fi provides an unprecedented customer experience for its premium wireless service. Customers who bring their own phones, however, will miss out on some of the advantages.

Before Google Fi, you would have to go to one of the 4 major wireless carriers such as Verizon, T‐Mobile, AT&T, and Sprint when you were looking for cellular service. These networks are viable solutions, regardless of which company you pick. But in some ways, some are better than others. This is where Google Fi comes in. Since 2015, Project Fi, Google’s effort to improve wireless service, has been among the most interesting options in the market.

A big change took place, the ‘Project’ part of the title was remove to leave just ‘Google Fi’ a few years ago. Fi increased connectivity to almost all unlocked phones and select Android phones from Motorola after previously limiting the service to the pixel users.

More than just the name has changed. In the last few years, the system has been significantly upgraded. Depending on which device you bring to Fi, it’s been improved in many ways.

What Exactly is Google Fi?

Google Fi is an MVNO (Mobile Virtual Network Operator) that makes use of several networks to provide coverage a wide coverage area. Google Fi provides better coverage than any single network and makes use of the best features from all of them.

Not all of these networks, however, can linked to every device on Fi. Fully Fi compatible devices, though, are available on the Google Fi platform, These include the Pixel 4a and Pixel 5, as well as the Pixel 4a 5G. While most GSM defective phones, including iPhones, can be switched to Fi, they can not switch to other networks, so those phones are stuck on T-Mobile instead. Fortunately, Google provides you a checklist to identify which Fi features it supports and a convenient tool for finding out if your phone is working on the service.

Switching between networks is smooth and happens automatically, without client experience if you have a Fi-optimized phone. In order to use the fastest and most reliable signal, the Google software automatically connects to millions of Wi-Fi hotspots worldwide in order to save data usage. Currently, Google said it has improved the transition between LTE and Wi-Fi by reducing the time up to 40 percent. The service works in over 170 countries.

For a while now, Google has set up its own Wi-Fi hotspots with VPN so that the intruders cannot intercept your connection. Recently, Fi users have progressed to the point where they can link mobile and private Wi-Fi with their VPN. It was originally exclusive to Fi supported devices, but now you can use it regardless of which Android phone you bring to their network. Its important to note that using a VPN often adds overhead to your network usage.

One of the most significant things about Google Fi is its price structure. Plans are ‘flexible’, so you only pay for the data you use. For one person, it’s just $20 a month plus $10 per gigabyte of data used. If you need more than one line, there are many more options:

Depending on how many people you would like to add to your play, the price structure varies. As you add more people, you get more of a discount.

Google Fi is also unusual in that when one goes over a certain amount of data, its rates do not round up. So, using 2.1 GB of data does not result in a charge for 3 GB of data. For example, at $10 per gigabyte, if you use 2.4GB of data you are charged $24. Verizon and everyone else would charge for 3GB used instead of the actual amount.

Due to Fi’s huge public Wi-Fi network, you may not even need to buy as much data as you normally would with other carriers.

Google Fi’s service has been as consistent and trustworthy. But the service is not the only thing to love about Google Fi. It also has a brilliantly designed app and an excellent customer experience. Google is the company that developed Android, so their app works very well with your phones Operating System.

Right when you open the app, you can see your data consumption at a glance. You can easily set a warning to know if you come a little too close for comfort to your self-imposed data limit. It also gives you a full breakdown of your data usage. The app makes it easy to change anything, from disabled numbers to voicemail preferences, and even your account service address.

Contacting a representative is also super easy with the app. You can contact support on the phone, in a chat, or via email.

Also, free data-only SIM cards can be ordered from within the Fi app. You can then put these SIM cards in a laptop, tablet, or even another phone. The data consumed on these devices is simply added in your monthly total with no additional charges.

Google Fi provides a high-quality user experience. It’s the best combination of price and convenience, with a straightforward pricing structure and well-built software. Sure, you can find lower cost plans out there, but this is one of the rare cases where you ‘get what you pay for.’ 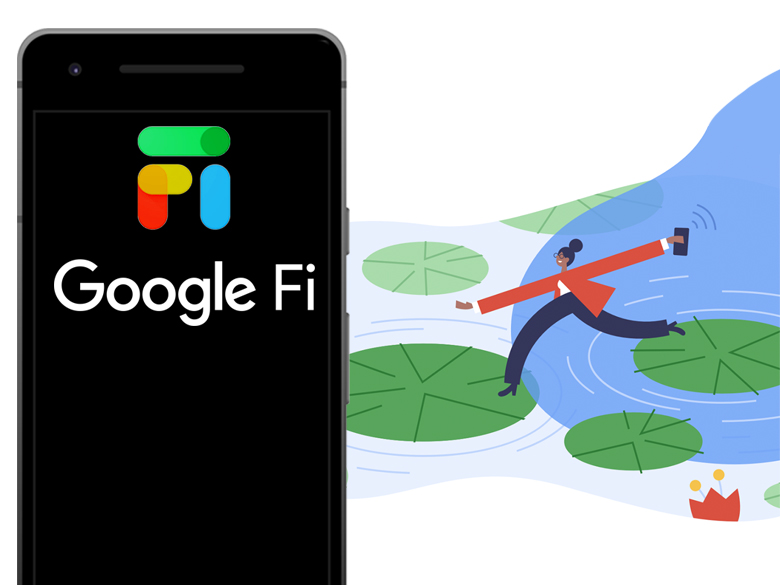