First up we have the long-awaited Pixel 5. Google talked a bit about this device at the event. It’s a flagship device that leans heavily towards value. It’s got a 5G-capable Snapdragon 765G SoC (System on Chip), which is a mid-to-high end processor. Google chose to ditch the Soli radar module that was found on the Pixel 4. So, that means you won’t be getting touch-less Motion Sense controls or 3D face-unlock.

The Pixel 5 has a fingerprint sensor and a thankfully, a notch-less design. Instead, Google opted for a nice, clean pinhole punchout for the camera. The device has a 6″ display with a resolution of 2,340 x 1,080. High refresh rate display fans need not fret. The Google Pixel 5 still has the 90Hz refresh rate of its predecessor. Anyone who has had to put with woeful battery life on the Pixel 3 and Pixel 4 will also be happy to learn the Pixel 5 comes with a larger 4,000mAh capacity battery.

Some other notable tweaks include a rejigged primary camera system made up of 12-megapixel and 16-megapixel sensors capturing photos from wide and ultra-wide lenses. It wouldn’t be a Pixel launch without new software features for those cameras and Google didn’t disappoint. One new feature is a panning tool that there’s to help you capture smooth video. Rounding out the Pixel 5’s spec list is support for Qi wireless charging, a water-resistant design, 128GB of storage and a price tag that starts at $699.

Pixel fans will notice we didn’t mention an XL model above. That’s because there’s isn’t one this year. Instead, Google plans to release a more premium version of the Pixel 4a — or a more affordable take on the Pixel 5, if that’s how you want to look at things. The $499 Pixel 4a 5G surprisingly has many of the same marquee features as its more expensive sibling. Both phones feature Qualcomm’s Snapdragon 765G processor. They also have the same front and rear camera arrays. What you won’t get with the Pixel 4a 5G is support for Qi wireless charging, waterproofing and a 90Hz display. But it does come with a headphone jack.

Google’s new Chromecast comes with a remote. Yes, Google has finally listened to its customers, but there’s a lot more to its latest streaming puck than merely a new way to control things. Google has gone with an updated design that borrows from both the Chromecast Ultra and its colorful Nest Mini speakers. Inside, the puck features a new processor that allows it to play 4K HDR content at up to 60 frames per second. Additionally, there’s support for Dolby Vision and surround sound.

As for that remote, it has a built-in microphone for quick and easy Assistant access. In terms of buttons, there are Back, Home, Mute, Power and Input keys, as well as a dedicated volume rocker. It also comes with shortcuts for YouTube and Netflix. Handy that.

Where things get somewhat confusing is that the new Chromecast runs Google TV. The platform runs on top of Android TV and adds a new interface to the mix that borrows features from Google’s Play Movies and TV app.

You can grab the Chromecast starting today for $50.

Lastly, Google announced a new smart speaker called Nest Audio. Like the Nest Mini, the Nest Audio is covered in fabric. Google outfitted it with a 19mm tweeter and 75mm mid-woofer. The company says those components allow the Nest Audio to get 75 percent louder than the Google Home. It also produces 50 percent more bass than that speaker.

On the device, you’ll find LED lights that turn on when you speak to Assistant. But there’s also a mute switch on the back of the speaker if you don’t want the digital helper turning on by accident. It also comes with a Media EQ feature that Google says will automatically tune your Nest Audio depending on what you’re listening to, and there’s support for multi-room audio.

You can also pair two Nest Audios to get stereo imaging, which will be tempting since a single speaker only costs $100. 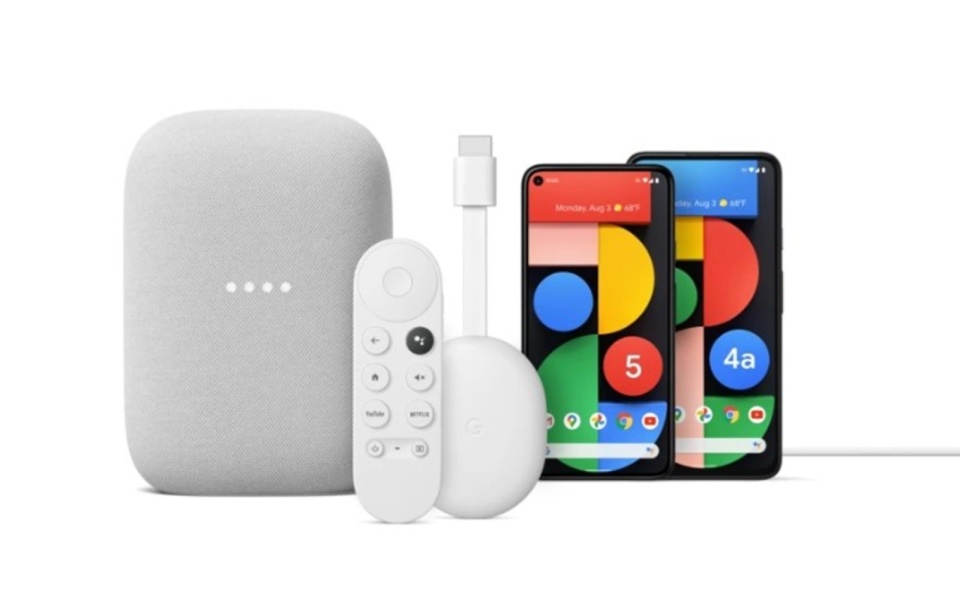