Back in 2019, GitHub announced that it had plans to archive all of the open-source software in its library in an Arctic vault. This move was part of its Archive Program. Well, they did it. Now, future generations will be able to access the entire GitHub library for hundreds, or even possibly thousands of years. This, of course, would only need to be accessed in a post-apocalyptic situation where the internet is a thing of the past. In fact, I’m sure humanity could rebuild most, if not all of the internet using software from the GitHub repository. Julia Metcalf, director of GitHub’s Strategic Programs division, revealed in a pot on GitHub’s blog in celebration of the mission’s success, that GitHub’s code database was finally stored in the vault on July 8th, 2020. This happened a little later than originally planned, due to the ongoing COVID-19 pandemic.

You would be incorrect to assume that GitHub simply loaded their data onto a bunch of hard drives and sent them to a vault in the artic. Instead, Github chose to use a different approach. The open-source software repository contracted archival film company ‘Piql’ to write 21TB of repository data onto 186 reels of film. Yes. Film. ‘Piqlfilm’, as it’s called, is a digital archival film that can be read by a computer. Think of it as a super-high-resolution punch card. A human could even read it with a magnifying glass if they had to. This was originally supposed to be carried out by February, but coronavirus related travel restrictions have made the journey to the Norwegian archipelago of Svalbard difficult until recently.

The entire GitHub repository is now safely stored inside a chamber within a decommissioned coal mine. The location that the film is stored in lies under hundreds of feet of permafrost.

Formerly named ‘Cinevation’, Piql claims that its film is stable enough to store data for no less than 500 years without any loss of information. 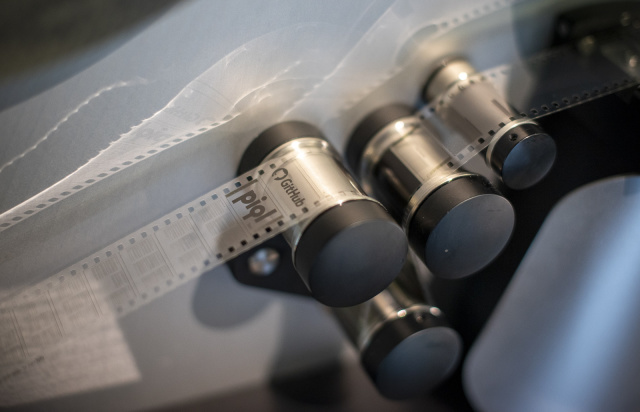