Researchers have managed to create a tiny, winged microchip. Yes. Winged. They are made to be carried by the wind and are planned to be used for several disease and air pollution applications. One of the most interesting things about these tiny flying chips is that they can be made from biodegradable materials.

The design of these tiny machines was inspired by those spinning seeds from cottonwood trees. You know, those little helicopter seeds you used to play with back when you were a kid and it was not too hot to go outside.

We think we’ve beaten biology… we’ve been able to build structures that fall in a more stable trajectory at slower terminal velocities than equivalent seeds. The other thing… was that we were able to make these helicopter flyer structures that are much smaller than seeds you would see in the natural world.

The good news is these things are not tiny enough to start exhibiting some annoying physics characteristics.

All of the advantages of the helicopter design begin to disappear below a certain length scale, so we pushed it all the way, as far as you can go or as physics would allow. Below that size scale, everything looks and falls like a sphere.

The even better news is that these devices are big enough to be able to carry electronics like power supplies and sensors. Multiple versions tested a range of different payloads like antennas and other communications equipment. Other tests had the tiny bots fly sensors that could monitor things like water quality, air acidity, and solar radiation.

These machines are still very much so in the concepts phase and are nowhere near being ready to deploy. The fact that these can be made out of biodegradable materials is really key to all of this working.

We don’t think about these devices… as a permanent monitoring componentry but rather temporary ones that are addressing a particular need that’s of finite time duration.

That’s the way that we’re envisioning things currently: you monitor for a month and then the devices die out, dissolve, and disappear, and maybe you have to redeploy them. 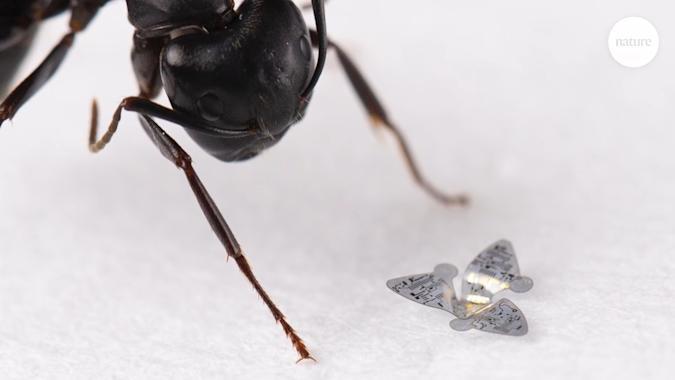