Poly Effects’ Beebo is a ‘multi modulation pedal’ that is designed to work with a guitar, but, it has broader use than that. More or less, we would say that it’s a digital synthesizer that work best at guitar effects.

On the front, you will find two knobs that can be used to change Beebo’s parameters. It also has a 5-inch touchscreen and 3-foot switches to help you build your patches. Similar to the ZOIA, Beebo doesn’t produce any sound until you connect the virtual modules. Unlike the ZOIA, though, navigating your creations and making new ones should be a lot easier considering the fact that the Beebo has a touchscreen.

Like most new products today, the Beebo is a tiny computer. It’s got a 64bit ARM CPU, 2GB of RAM, and 16GB of built-in storage. In the Beebo, you will find many traditional effects such as chorus, delay, and reverb. You will also find a flanger and a phaser. Where the Beebo really shines, however, is in more exotic effects like its digital oscillators, granular processor, filters, and LFO (Low-Frequency Oscillation) effects. Beebo allows you to combine all of these into powerful, custom effects.

It’s important to remember that many of the synth modules on the Beebo are based on devices from Mutable Instruments, such as Clouds, Grids, Plaits, and Warps. Each of these modules are insanely popular and typically several hundred dollars apiece, so when they come in a $399 guitar pedal, that’s a great deal.

I think it’s interesting to point out that this device is literally the same exact hardware as the company that makes it, Poly Effects’, most recently released effects pedal, the Digit. The Beebo is just running a different firmware. The cool thing is, is that you can freely go back and forth between the two firmwares. So basically, if you bought a Digit, then you already have a Beebo, and vice-versa.

The main focus of the Digit is on delays, cab sims, and reverbs. In fact, it dedicates most of its CPU power to things like its convolution reverb engine. With the Digit, you can use the USB port to install your own IR (impulse response) files. This lets you faithfully recreate the sound characteristics of your favorite rack mount reverb or vintage amp. You can even use it to recreate the natural acoustics of your bathroom.

You can order the Beebo and Digit now, but keep in mind that due to high demand, there is about a 3-week waiting period for either device. This makes sense considering the fact that Poly is still a pretty small company that makes all of their gear by hand. 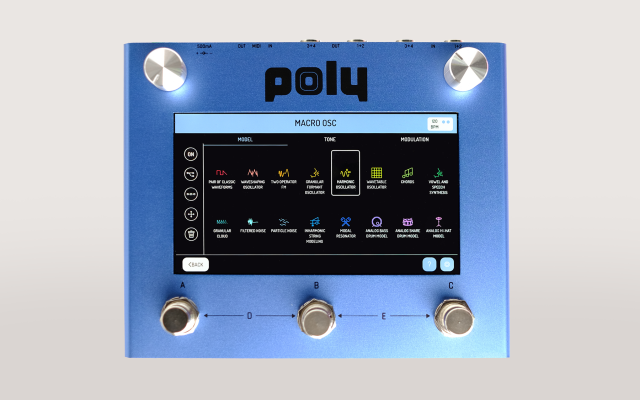