Have you ever noticed that during a video call, you can never look someone in the eyes? Well, under display cameras can fix that. They also allow manufacturers to build all-screen phones that don’t have to have that screen notch or a complex pop-up camera. Xiaomi has unveiled its 3rd generation of under-display camera that promises to see the technology in the mass market ‘next year.’

Cameras that can be housed under the screen present two issues. They can create a dark ‘hole’ in the display and they can make pictures taken with the camera look dull and hazy. Xiaomi claims, however, that its next under-screen camera tech can ‘perfectly disguise the front camera under the phone’s screen without ruining the edge-to-edge display effect.’ So, we will be able to get a seamless full-screen display without a whole-punch, notch, or mechanical pop-up while meeting regular front camera performance. And the main benefit to this, in my opinion, the ability to have a true face-to-face, eye-to-eye video calling experience.

Xiaomi has developed a pixel grid arrangement that allows photons to pass through the gap in between sub-pixels. The sub-pixels are able to be in this arrangement with zero loss in pixel density. That’s pretty significant. This means that the display on top of the camera is the same as it else everywhere else on the screen. It has the same brightness, color gamut and color accuracy. Xiaomi claims that the by optimizing the camera algorithm, it was able to make it perform equal to a conventional front-facing camera.

ZTE’s Axon 20 5G will be the first mass-produced phone to feature an under-display camera and it will show up on the market on September 1st. The ZTE phone uses a totally different approach, though, and Xiaomi’s technology won’t be in the wild until some time next year. It remains to be seen which solution is better. 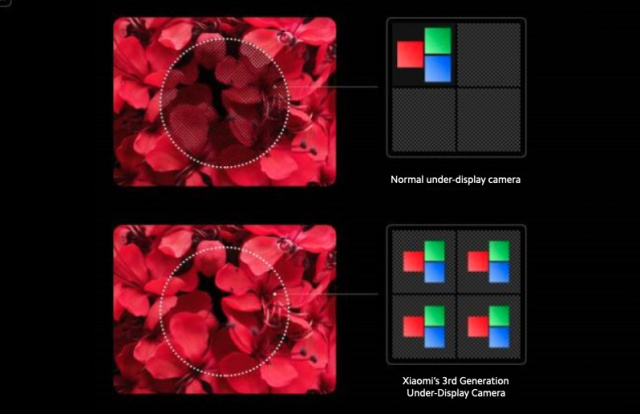