When it comes to choosing the best sedan cars, it is always a tie between Camry and Accord because both display super cool features and qualities and choosing one is tough. It is a question that has revolved around some potential buyers to which car is a better choice. The Honda Accord and the Toyota Camry are the two specific sedan cars that have been the personal favourites of hundreds of families for more than three decades and Americans prioritize buying one of these two. Although the popularity of the SUVs has hit the market recently, the super sleek and midsize sedans like the Accord and the Camry have been playing major roles in the play. 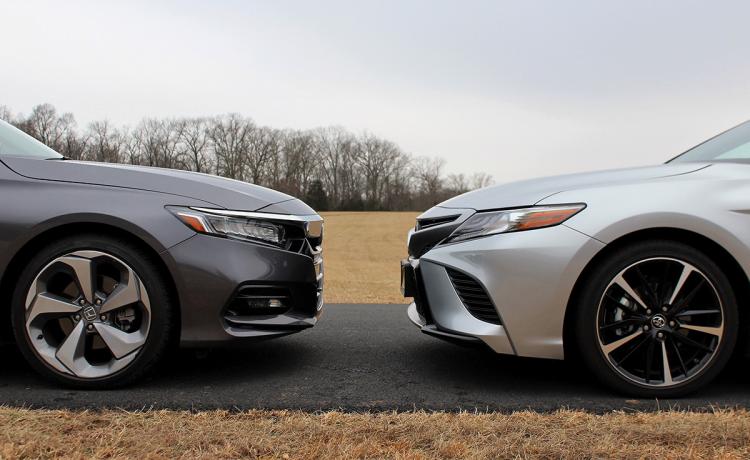 The 2018 models of the two cars Honda and Toyota have made a super brand new with the Honda being the 10th generation and the Toyota in its eighth generation. The base of the 2018 Accord LX begins at $23, 570 whereas the top-of-the-line Touring model begins at $ 33,800. The mid-grade sports model San Marino Red begins at $25,780. All in all, the Accord sedan is available in the market in six trim levels with three specific engines and three transmissions out of which the users can find the ideal one.

When you look at the aesthetic appeal of the Accord, it is not that impressive especially not in the traditional sense. However, the edgy and attractive sedan gets thousands of buyers. The hammer-head shark-esque in the front bonnet of Accord will remind you about the dark days of Acura’s controversial silver beak. Along with the edge exterior of the sedan car, the interior is not that appealing regarding looks and the style. If you are looking for a simple and elegant looking sedan, you can go for this.

When you talk about the base of Camry, it begins at $23, 495 whereas the XSE V6 opens at $34,950. As that of Accord, the Toyota Camry can also be bought with a variety of flavours. You can get the sedan in 10 trim levels with three engines and two transmissions to choose from.

The Toyota Camry is certainly considered aesthetically appealing than that of Accord in the traditional sense. The rear cabin of Toyota Camry features slightly less legroom as compared to that of the Accord while boasting slightly better than headroom. The trunk of the Camry is slightly smaller of 15.1 cubic-feet, but Camry has a 16-gallon fuel tank that should be kept in mind whereas Accord has 14.8-gallon unit.

The Toyota Camry is also available with a display of 10-inch colour head-up and a 7-inch TFT information display.