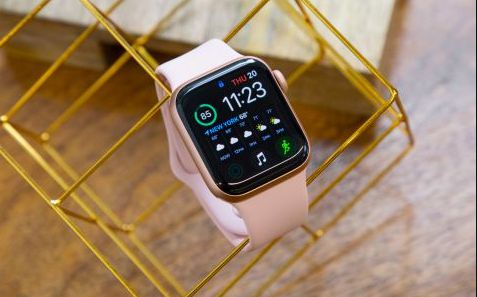 If you are talking about buying a smartwatch nowadays, then Apple watch series 4 is one of the best options. In September 2014, Apple launched apple’s first watch, it becomes one of the best accessories of iPhone, and no doubt it was most expensive in the list of smartwatches. But peoples loved it because apple especially takes care of its personality on a person’s body. Now if you are talking about apple watch capabilities that the phone could never have. Apple adds the best technology sensors to a watch that is helpful in different aspects. In apple watch, you will be entertained with a heart rate sensor that enables high rate alerts, which indicate the user should concern medical treatment.

The Apple watch series 4 is a significant step forward, the US food and drug authorities giving clearance to apple for two Game-Changing features. Apple introduced the ECG app that can be capable of taking electrocardiograms on the go, and another feature (atrial fibrillation) adds, that alerts you when your involvement in five irregular heart rhythms. Any watch running with OS 5 can have atrial fibrillation feature in it.

Apple watch performance, apple claims 64-bit dual-core s4 chip used in the latest apple watch that is too faster than S3 chip that was come in series 3 apple watch. In other side comparing with other brand watches apple watch is best in all aspects. If you are corresponding with previous model series 3 watch, series 4 is faster but not too much difference. But if you are comparing with series 2 watch, then apple series 4 watch has a big difference performance-wise and technology-wise with time.

Apple introduced the latest technology sensors and improved its display size and design as well. In new apple watch processor S4 chip, it works with 60fps’ Physical-based’ Metal rendering, and real-time physics using only 64% power of the chip.

If you are comparing apple watch series 4 with other smartwatches that are running on google’s wear OS, and Qualcomm Snapdragon 2100 chip. And it will change with new snapdragon 3100 processor, but on the other hand, Apple’s series 4 processor S4 chip is still far-ahead in smartwatches processor power.

Apple used LTPO OLED Retina Display in apple watch series 4 with high resolution of 368×448 pixels with 1.78-inch screen display. That is bigger than series 3 watch that was launched in last year.

Apple also improves its design from previous models; it comes with height 44mm, width 38mm and width 10.7mm. The stainless steel used in the watch, overall apple watch net weight is 48g that is good enough for smartwatches.

Apple watches series 4 is water resistance watch with 50-meter shallow water, means it will bear while you are swimming, walking in the rain etc. That was an impressive thing in water resistance point of view.

Apple watches competitive with LTE and UMTS2 (GPS +Cellular models). It comes with 802.11b/g/n 2.4 GHz WI-FI module. Bluetooth 5.0 Used in this watch that is better than its last series 3. It’s more reliable than series 3 apple watch.

In series 4 watch, lithium-ion battery with 291.8 mAh (1.13Wh) power that can be up to 18 hours in regular use. It comes with a magnetic charging cable which helps to quick recharge battery.

Read Next: Review: Plantronics RIG 700HX is a Gaming Headset – Perfect to Use At Work