In recent time it has been seen that Spotify is now testing several things which include curated podcast playlists, an in-car device and also the standalone station’s app.  With all this, it is also now been seen that Spotify has launched its all-new app in the US, which is known as Stations.  This is developed in such a way that it can draw songs from different kinds of genres, artists, or even other things. 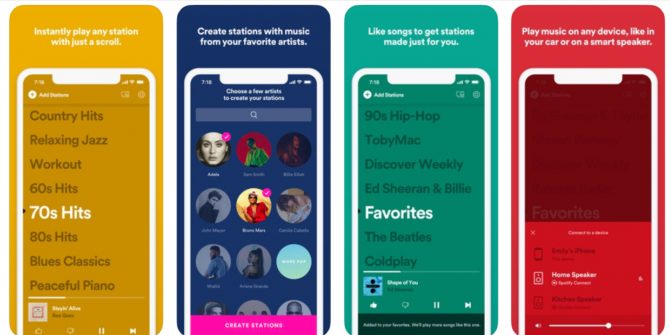 This all-new Pandoraesque stations app is currently available in the US market from this week. This launched was followed after the test in Australia, which occurs in both iOS and Android versions. This is said to be like a very simple software which helps in breaking the Spotify’s radio feature which comes with the standalone app for the very easy access.  Moreover, this also allows you very quickly to fire up the music shuffle that comes with the minimal taps in place of going for the full version to get it.

When you open the Spotify app, you can see that Stations is one among the eight options which are present on the menu.  Stations are like the one who calls it as artistic and genre-focused radio channels.  This means when you want to mix any of the artist’s tune or want to explore the genre based artists; then this app is the one for you.

If you are going to download Stations and needs to run it, then at first you just need to link the station with Spotify account, and then everything is going good for you.  This app comes with two versions, which are paid subscriptions and free subscriptions.  Moreover, in this app, you can find some of the best apps which have got some of the new channels which are based on genres and other artists. Apart from this all, you can also find that personalization is one that comes with this Spotify, and this is there in the app from very first.

You can also add some more stations to the menu, and it can be done with just adding a button in the top left corner of the menu. After that, you can add some of your favorite channels, which are based on an artist.  With this, it is seen that this lists of the app are like the kind of artists in which you can expect to get on this Station, and you can then go for the preview of the lineup that you have added in it.

In this app, all the Stations that you have got will be present on the main screen of the app in a clean, typography as well as in bold version. This is like the list of things which itself serves as one of the main navigation with which you can scroll in the list, and it helps you to go for browsing without any problem. You can also edit the station, and this can be done by tapping on the name of the station.