The main attraction of the Galaxy A50 is its 6.4-inch Super AMOLED screen, same as used in Galaxy A30 and recently launched M30. All three phones have same scoop-shaped Infinity-U notch. Samsung has done well in cutting out bezels and giving more area for the screen in a compact form factor. The Phone has rounded corners with 91.6 per cent Screen to body ratio. Though there’s still a chin, the phone overall looks slick considering the price point.

Samsung has not stated which material is used at the back of the phone but it feels like plastic or polycarbonate is used. The back panel is slightly curved at the edges to provide a better user experience. The Galaxy A50 Was launched in 4 colour options – Black, White, Blue, and Coral Pink.

The rear Panel of the Black Galaxy A50 is more like a translucent Grey with an iridescent quality to it that makes light to refract into rainbow patterns. Unfortunately, the surface is very shiny and can get scratched easily, so we recommend u should put a case to prevent smudges and scratches.

Image Credits: androidpitThe design of the triple camera set up at the rear is inherited from the last year’s Galaxy A7. The Galaxy A50 has a vertical triple camera setup. Right below the camera, there’s an LED Flash.

The more premium box of the galaxy A50 contains a plastic slipcase, Headset, SIM Eject pin, 15-Watt Charger, and a USB type-C cable.

The Phone Comes in two variants – 4GB RAM and 64 GB storage, 6GB RAM and 64GB storage. We are a little bit disappointed here because Samsung has given 128Gb option even in Galaxy M30 but not in A50.

Samsung Galaxy A50 ships with Android 9.0 (Pie) with Samsung’s One UI out of the box.

Samsung is heavily promoting the Galaxy A50’s Super AMOLED display and it really is Crisp, vibrant, and bright. Everything looks good on this display right from the UI to Videos to games. It also features an always-on display which has an option to be scheduled so that it doesn’t annoy you at night.

Talking about the sound output from Galaxy A50’s single speaker, it can get very loud but isn’t very clear. Music and Voices are grating at high volumes, and while you can use it occasionally for watching videos, don’t expect to enjoy a full movie. The included headset isn’t very comfortable, but at the same time, the sound isn’t too bad, but highs are a bit shrill and there’s barely any bass. So we would recommend using your own earphones to get better sound output.

The in-display fingerprint sensor is a big draw for a lot of people, but it has its own downsides. The recognition is fairly slow and often takes 2 seconds or more to unlock the phone. It sometimes can be irritating. It will take trial and error to learn exactly where to place the finger. We didn’t have trouble with accuracy but recognition can fail if you don’t touch the sensor long enough.

There’s also face recognition, which may be a lot quicker. It unlocks the phone as soon as the camera detects your face.

General day to day usage was fine, there were no hiccups or lags. We Played PUBG And Asphalt 9 at the highest graphics setting possible and weren’t disappointed.

The Exynos 9610 Processor isn’t something record-breaking, but it is competent for the competition in the same segment.

The battery life can be stretched to a day and a half with normal use. We took a lot of photos and videos, streamed a movie played a few games, and surfed the web, at at the end of the day, we were left with about 30% juice in it.

Rear camera features include a Live Focus mode for portraits, a 480fps 720p slo-mo video mode, Hyper-lapse mode for timelapse videos, AR Emojis, and an intelligent scene optimization. The Pro mode isn’t that great as it only has ISO, white balance and exposure compensation controls. Do note that you can only switch between standard and wide-angle cameras before you begin shooting videos, but not while recording.

We were happy with the photos that Galaxy A50 took. It tended to overexpose brightly lit parts of a frame in the day time, but most of the photos camera out to be really good with a lot of details. The wide-angle camera surprisingly gives a very wide view of the scene, but the quality is definitely lower

The performance at night was decent, but not that great. Photos tend to look good on phone’s screen but as soon as you post it online or view it in its full size, you will notice some motion blur. But if the lighting condition is good, close-ups taken are good.

The front-facing camera has a live focus mode. You can change the blur intensity after the shot has been taken, but the edge detection isn’t very accurate. 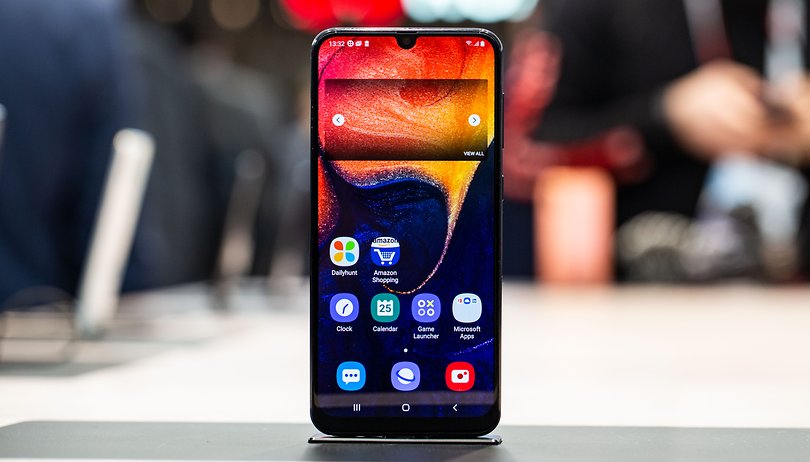