Google is introducing an all-new way for Android users to protect critical files. It’s called ‘Safe Folder’, and it’s located in the Files by Google app. With this passworded folder you can protect documents, audio files, images, videos The folder is locked with a 4 digit PIN the moment you switch away from the Files app. You have to use your PIN to get in every time.

According to Google’s ‘Next Billion Users’ product team, ‘sharing a personal device with spouses, siblings or children is often a cultural expectation, especially for women.’ Because of that, it created a feature for parents that may share their phone with their child.

In 2017, Google launched the Files app as part of ‘Android Go’, and on top of giving you immediate access to your apps, images, downloads, received files, video, audio, and documents, it also offers suggestions for cleaning storage space. Google said the app has deleted ‘over 1 trillion files of digital clutter’ since its launch. This new PIN projected Safe Folder feature is now available in beta and will roll out to everyone else’over the following weeks.’ 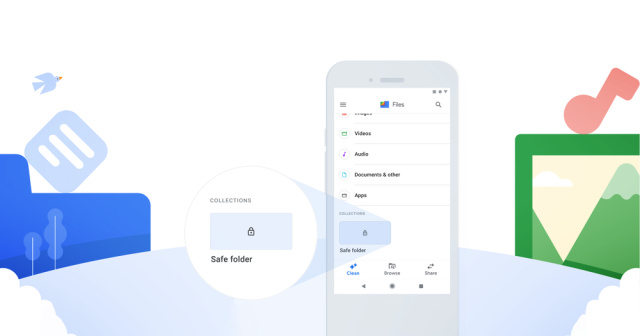