Nikon has announced a new full-frame camera to add to its Z mount family. Meet the entry-level Nikon Z5. For this camera, Nikon is focusing more on still images rather than video. Still, the Z5 isn’t quite as stripped down as rival Canon’s RP version of their EOS Camera.

The Nikon Z5 uses the same ‘Expeed 6’ SoC (System on Chip) as it’s older siblings, the Z6 and Z7, but for the Z5, Nikon used a 24-megapixel CMOS sensor rather than the BSI sensor that’s included in the Z6. It features a 273-point hybrid contrast and phase detect auto-focus system and includes built in face detection that works for humans and most animals.

The Z5 isn’t the fastest shooter, coming it at only 4.5 FPS (Frames Per Second) with autofocus enabled. That is only a hair less than the rival Cannon’s EOS RP’s 5 fps, but it’s still a lot less than what you can get on similarly-priced cameras from Sony such as it’s A6600, which can do 11 FPS.

The Z5 can shoot video at 4K 30 fps, but similarly to the Canon EOS R and RP, you end up locked in to a 1.7X crop. 1080p video recording using the full sensor width is supported, but you are limited to 60 FPS.

One of the most impressive features of the Z5 is its five-axis in-body sensor stabilization system. Nikon refers to it as ‘vibration reduction’ as they do in the Z6 and Z7. But unlike those models, the Z5 has twin UHS II
card slots compared to the single XQD slot found on the Z6 and Z7.

Other nice touches are a 3.7 Megapixel OLED viewfinder, tilting touchscreen, and it’s 390 shot EN-EL15C battery. Another difference between this camera and the higher end models is the use of low cost plastic rather than an expensive metal on the rear and bottom of this camera. 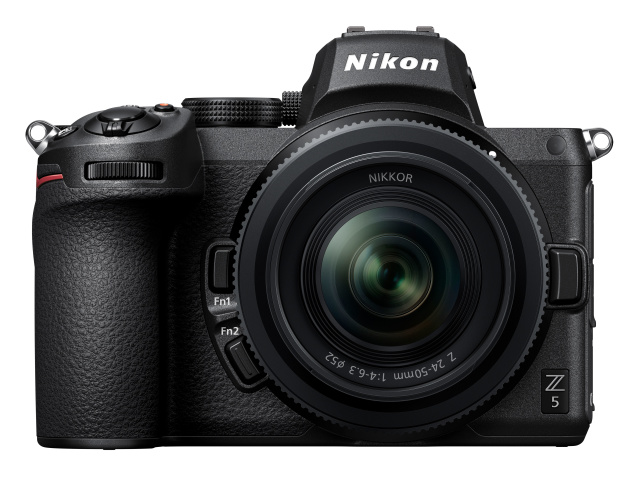