MIT’s Computer Science and Artificial Intelligence division has created a gripping robot that has enough dexterity to delicately handle thin objects like cables, ropes, and wires. One day, the technology could be used to do things like wire shaping, folding clothes, and cleaning up complicated messes.

MIT spokeswoman Rachel Gordon said that it can be quite challenging for humans to accurately manipulate thin and flexible objects, and this type of task is usually ‘nearly impossible’ for a robot to perform, Before this, the go-to approach for robots had been to employ ‘a series of slow and incremental deformations,’ along with mechanical fixtures, to work with these kinds of objects.

The MIT researchers, though, took a different approach. They built a two-fingered gripping mechanism that more closely resembles human fingers. The ‘fingers’ are equipped with ‘GelSight’ sensors which are extremely sensitive tactile sensors. GelSight sensors are made of a very soft rubber that has embedded cameras. The robot has two control systems: one of them regulates the strength of the grip, and the other adjusts the position of the gripper in order to for the gripper to maintain the cable within its range of motion.

Manipulating cables can be very difficult for robots to do because that type of task requires the robot to make sure that the cable doesn’t fall from its fingers while also being able to deliver the kind of smooth sliding needed to work with such items. To our surprise, MIT’s robot was able to perform a few tasks reliably, including locating the end of a headphone cable and even plugging it into a headphone jack.

There is, however, still a long way to go before MIT’s robot is able to take part in any kind of practical application. For example, the robot had difficulty pulling a cable back once the cable reached the end of one of the robot’s fingers. Researchers say this is due to the convex surface of the GelSight sensor. The team is working to re-design the finger-sensor shape to improve the robot’s performance even further. 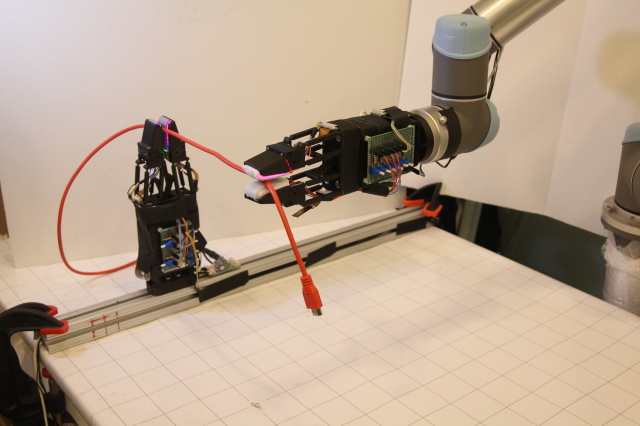