A Little Bit of History

Home movies have been around since the 1980s. Up until recently, however, it’s never been really comparable to going to a proper movie theater. Right up until the early 2010s, TVs and computers just couldn’t replicate the sort of effects you could get on screen. This didn’t matter too much for indie films but meant that blockbusters definitely worked best in movie theaters.

By the 2010s, however, consumer-grade technology had reached the sort of standard where it could handle the likes of Game of Thrones. Whatever you think of the ending, the special effects are at least on a par with some of the biggest movie franchises of all time including The Lord of the Rings, Harry Potter, and The Hunger Games.

That could easily have spelled the end of movie theaters. At the time, however, they still had two key advantages over home movies. Firstly, they got all the newest releases. Secondly, they delivered a very different experience.

The Impact of COVID19

Then COVID19 happened. Movie theaters were forced to close and productions were suspended (or canned). For a brief but horrible moment, it looked like entertainment news sites like Entertainment Nerd were going to end up with empty spaces where fresh content should have been.

Studios, however, quickly found ways to get back in business, albeit with caution. This was good news for the world in general. Only time will tell, however, if it’s going to be good news for movie theaters specifically.

The challenge for movie theaters is that studios got back into business by leveraging the internet. In particular, they’ve brought out material for their own streaming platforms. This has tended to be on a smaller scale than films in the same franchise (e.g. WandaVision versus Captain Marvel). Black Widow is, however, due to premiere online at the same time as in theaters.

Studio executives are likely to be watching Black Widow’s performance with a lot of interest. On the one hand, it’s still early days in the post-COVID19 reopening. People are likely to be in the process of readjusting both mentally and financially. On the other hand, if they continue to watch new releases online, the studio executives have a strong incentive to encourage them.

Saved by the Bell?

Although consumer-grade technology has come on massively, consumers still need to consider everyday practicalities. For example, they need to keep their neighbors happy. That might become a bit of a problem if you have cinema soundtracks blasting out of your home-theater system.

You can, of course, get around this by wearing earphones. Gamers often do. Gaming, however, is, by definition, an active experience. Movies, by contrast, are often something you just chill out and watch. So, while movie theaters are definitely under threat, it might still be too early to start playing their end credits. 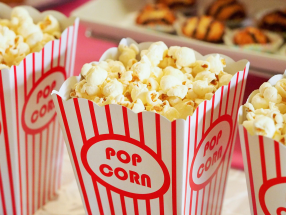