Facebook-owned photo-sharing platform Instagram is reportedly gearing up to launch a new feature on its platform. The latest feature, which goes by the name of ‘Nametags,’ has reportedly begun appearing on most Instagram applications. The latest will allegedly give users the freedom to create special images. The same special images can be put into use by uploading the Instagram Stories. The ‘Stories’ facility is a separate service that users can avail on the platform. “To create special images that Instagram users can scan with their Instagram Stories camera, eliminating the need to share links,” an online report suggests. It is being reported that the latest feature finds a lot of similarities with Snapchat’s QR codes feature. It does not come across as a surprise that Instagram ends up ripping off Snapchat’s features. The photo-sharing platform ends up copying most of the major features itself. In fact, Instagram’s ‘Stories’ feature itself is a rip-off of the Snapchat platform. If reports are believed to be true, then the Facebook-owned platform has reportedly been working on the latest feature for quite some time now. 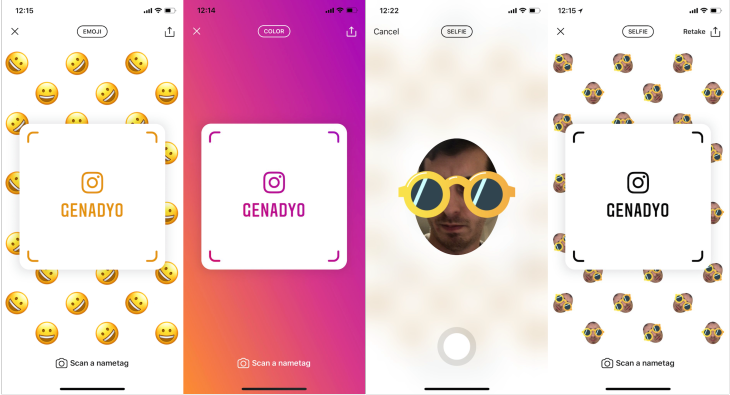 The feature was first spotted earlier in the code of the application earlier this year. However, a little while later, a new report emerged online that indicated that the company might be ready to launch the feature as soon as possible. The feature has already started rolling out on the most of the smartphone users. The same reports further go on to state that the ‘Nametags’ facility will now help users follow each other after just meeting each other. Therefore, one need not wait long hours for the opposite person to accept the following request. You can simply do it through the ‘Nametags’ feature. The feature is expected to be useful for businesses and social media stars. The facility will reportedly help the users quicken up their pace as far as sharing information on Instagram accounts is concerned.

One can simply put their respective ‘Nametag’ under the image, and the post will automatically appear on the social media platform. “It will also be useful for businesses and social media stars to quickly share their Instagram accounts by putting their ‘Nametag’ on social media, printing posters and even selling merchandise with these tags,” an online report further goes on to note.

According to numerous reports, the new feature will reportedly be the only feature that Instagram is actively working on as such. Before this, stories were floating on the internet that went on to claim that the Facebook-owned platform is working on introducing video calls as well. After the integration, video calls on the platform would be possible, just like they appear on Facebook and WhatsApp. The company is also actively testing out a portrait mode wherein one can add images by merely uploading pictures in that particular mode. Another online report further goes on to point out that the button will reportedly be present towards the top right area on the profile page. Users can tap the button that will invoke the ‘Nametags editor.’ The feature will allow users to change the background of their ‘Nametags’ and to add a sort of emoji pattern. According to the report, adding your selfie to the Nametag will turn your selfie into an augmented reality face filter that turns into an emoji pattern.

Meanwhile, Facebook CEO Mark Zuckerberg is reportedly in trouble over the Cambridge Analytica data scandal. Zuckerberg allegedly appeared before the Congress meeting and took full responsibility for what took place. The next meeting is expected to take place today itself.