Online accounts are meant to be secured with one or the other things in the market, to protect your online account you are already be using two-factor authentication to prevent unauthorized access, Google said that now its the time to take the next step by using a physical security key for the protection of online accounts. Google has announced that it will launch a new method for the security of your accounts and launched the Titan Security Key, which lets you log in to your account on your desktop by authenticating your identity with over USB or Bluetooth. 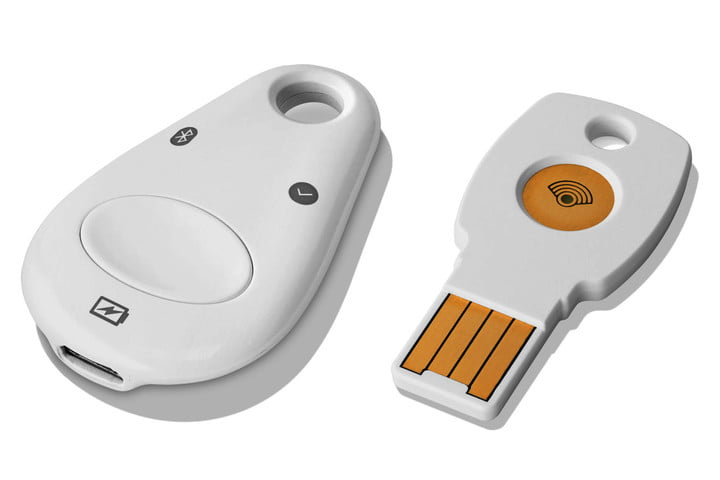 As you know that the Bluetooth one works wirelessly and lasts up to six months without needing a battery change, therefore the titian key’s USB version plugs into your laptop. According to the news we get to know that they presently cost between $20 and $25 apiece, but Google officially said that it would bring the cost down to around $10 very soon enough.
For your knowledge, I would brief you that these type of invention have not started now, in fact, they are from past many years. The firm named as Swedish security firm Yubico has been making these type of security devices from last many years which helps protect your online accounts and generally offers a range of different models that you can use with online services on your desktop and phone – including those from Google. Having these type of devices will surely benefit you because it helps your online accounts to be safe and prevent hacking. There are many forms of hackers which hacks your accounts by e-mail and many more social networking sites but they’ll be out of luck if your account requires a physical key to log in.
After the test of these physical security key which was noted earlier this week that since early 2017, not a single one of its 85,000+ employees had fallen prey to such attacks, thanks to the use of these keys. It is successfully working on all of them and is currently offering them to customers of its Cloud service through sales reps. For those who used to handle their work online and do their piece of work with sensitive information on a regular basis, then you should surely have this security key regardless of whether you buy a Titan key from Google, one of Yubico’s offerings, or an open-source alternative from Berlin-based Nitrokey.
Google said that these key will be soon available in the stores of Titan and it will be interesting to see if the company can start a global shift towards the use of these devices with this push. But it’ll have its work cut out for it in building the habit among users: earlier this year, Google engineer Grzegorz Milka said that less than 10 per cent of Gmail users uses two-factor authentication on their accounts.
Category: Applications, Gadgets Submitted by: Jack Thomas
Tags:Google, google key, protection of data, titan physical key