A slew of updates have been announced for Google’s Docs, Slides, and Sheets apps. The mobile versions of these popular programs are finally getting some long-loved desktop features. While most of these additions to the suite of programs are free, others require you to be paying G Suite subscribers, at least for now. Even excluding the features behind the mentioned paywall, many users will get quite a nice set of productivity increasing updates at no cost.

Soon, G Suite subscribers will have access to Smart Compose from within Docs. The web version of Docs and Gmail have had that feature for a while. Smart Compose is a nifty little tool where suggestions for completing your sentences are automatically offered as you type. It’s an extremely useful feature, especially for users that aren’t all that skilled at thumb-typing on a software keyboard. Google is launching Smart Compose on its iOS Docs app at the moment and the company’s own platform, Android will Smart Compose on the 12th of August. This is, however, one of those paid features that I mentioned before, but there is a chance it will make it to the free tier.

Within the same app, users are going to be able to use link previews. When tapping on a link, you will now see the contents meta-description and featured image, among other details. All the links will show up at the bottom of your on cards. This feature is currently live on Docs for iOS and will make its way to Android on August 12th.

Another part of the update is the ability to work with Microsoft Office documents without having first to convert them. You’ll also get an option to easily scroll through presentations in Slides, and yes, pinch-zooming is finally supported. Other details include and an updated aesthetic for action items and comments and. And quite possibly the most useful new feature is the option to respond to and work out comments from collaborators from directly within Gmail.

And lastly: loved by some and ignored by others, dark mode will be added to Docs, Sheets and Slides. 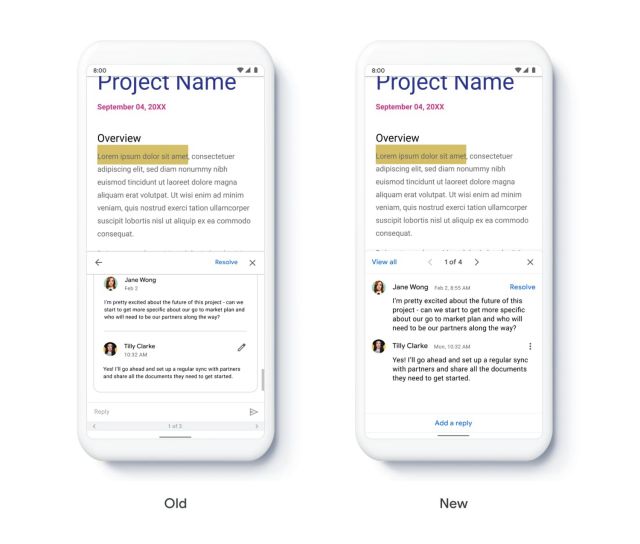