American Automobile maker Ford, recently unveiled the new Bronco R race truck on Monday. The development hits the production of the firm’s SUV, as early as next year. The car will participate in racing later this month in the Baja Peninsula. The vehicle will go through a 1,000-mile trek, but other details have not revealed yet. The company said that the twin-turbo EcoBoost engine in the prototype is a representation of what the upcoming Bronco will offer. The company confirmed that the looks of the prototype would be similar to the forthcoming SUV. 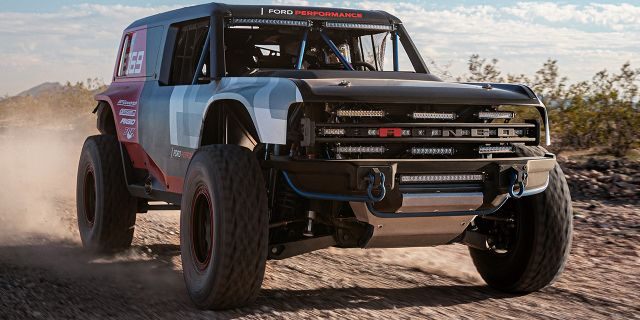 It is now clear that the body shape of the SUV will close to the prototype looks. The front grille is expected to be the same in both vehicles. The checking in the rear side is preventing to reveal any information about the car. One can expect the blocky taillights and tire mounted flush in the upcoming SUV from Ford. The design looks stunning, and will not disappoint many, experts added. The prototype is suggesting Ford’s new SUV will be a proper off-road SUV.

Most of the parts used for racing purposes will not feature in the upcoming SUV. The SUV sits on Ford’s T6 architecture. There will be a roll cage, an independent suspension on the front side. The new SUV is anticipated to have a five-link rear chassis design, which can move 18 inches. The vehicle will have 17-inch wheels, Custom Fox shocks, and 37-inch tires. The car reportedly uses Virtual reality technology and 3D printed parts.

The new SUV is expected to start its production from the next spring. The demand for SUV is increasing in the United States; as a result, most of the major players in the industry are trying their hand in the sector. Recently, another American Automobile giant Tesla announced to start the production of its upcoming SUV from the Q1 of 2020.