Apple is selling what they refer to as a ‘high-end’ 40 Gbps Thunderbolt cable. There are a few different philosophies that can be used when approaching (and trying to justify) the high price of many apple products, but folks, this is a damn cable. It’s ridiculously expensive, there is no back and forth on this one. Even though the $129 Thunderbolt 3 Pro cable does have full support for Thunderbolt 3 and all the bells and whistles that come along with that, including 100 watt charging, DisplayPort video, and USB 3.1 Gen 2 transfer rates up to 10 Gbps, there is still no way to justify its price.

For that price, you can pick up a decent mid-range phone or an entire used laptop. At 2m long and priced at $129, customers will have to pay nearly $20 per foot for this new cable. Sure it has 40 Gbps speeds, and some nice wiz-bang chips built into the cable itself, making it an ‘active’ solution rather than a ‘passive one,’ but still. No. It’s a cable, people. This is something that is supposed to be used to connect one piece of expensive equipment to another. It’s not supposed to be itself, expensive.

Apple claims that this is the best cable that can be used to connect a Mac with Thunderbolt 3 to Thunderbolt 3 devices such as a ‘ProDisplay XDR, docks and hard drives.’ To be fair, this cable can do something that other thunderbolt cables can’t. Thunderbolt 3 is only capable of 40 Gpbs at cable lengths of up to 1.5 feet. Any further than that, and the cable has to slow down the data rate to avoid errors in transmission. This cable has special, powered chips that allow the length of the cable to be extended without losing performance.

For now, video editors and other professionals won’t really have a choice. They will have to buy this cable until another manufacturer comes along to make a reasonably priced cable. The rest of us, luckily, can avoid this highly ‘Apple-taxed’ product. 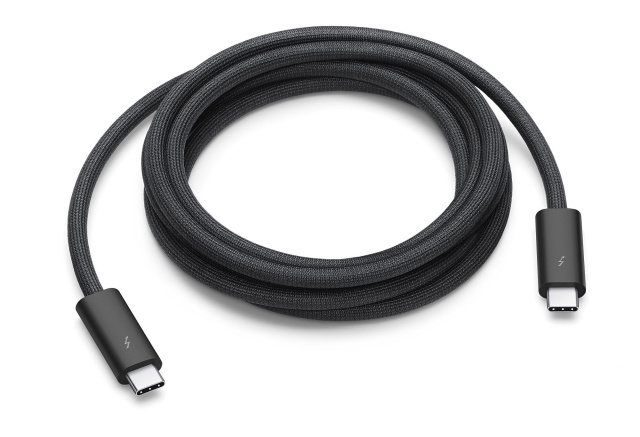