Android Messages have long been behind the feature-set of other platforms, and it’s really nice to see that start to change. The latest feature addition is emoji reactions. The reactions feature had been in limited testing since at least March, but Google is officially releasing it the masses.

Like Facebook, all the have to do to react to a message in Android is long pressing on it. At the moment there are only 7 emoji to choose from including laughter, like, love, surprise, sadness, anger and dislike. You will have to make sure you’ve got Messages’ Chat functionality turned on to add reactions. This will not work with iPhones or other Android users who don’t have an RCS-compatible device.

ndroid is pretty behind when it comes to reactions. Facebook had it really early on for posts in 2016 and then a year later the social media giant began testing reactions in Messenger, where they have now become a staple feature.

Google also mentioned some other features that it had recently added to Messages. The app cam now suggesting emoji and text based on the most recently received message, and Smart Reply will recommend stickers, too.

There is also new built-in image editor that will let you doodle on any photo. To get to it, just take a photo using the normal camera interface. 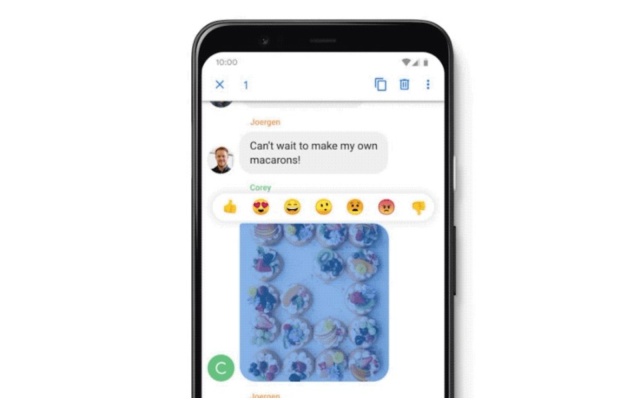