Technology is advancing at a rapid pace. It appears that the gadgets that companies are coming up with lately are right out of a science-fiction movie. Now, a new report suggests that the researchers have created a new device that can read user’s thoughts. Yes, you read that right. Researchers at MIT have reportedly developed a new method that can read user’s thoughts and transcribe them into words. The device has been giving the name, ‘Alter Ego.’ According to a recent report, the device is created by wearable headset technology along with the help of electrodes. These electrodes are designed in a certain way to be attached to one’s face.

Researchers at MIT recently took the wraps off Alter Ego. The device was reportedly developed by a graduate student who goes by the name of Arnav Kapur. The headset is allegedly designed in a specific manner to sit carefully on the user’s head and get attached to the jaw region easily. The device goes on to feature electrodes that are reportedly capable of picking up on neuromuscular signals that come packs up the face and jaw well. The headset is basing on a new type of technology called internal monologues that go on to trigger messages. These signals cannot possibly be seen by the human eye.

However, when talks to themselves in their heads, without actually saying anything out loud, the headset reportedly interprets these thoughts. The researchers describe this activity as the headset understanding what the user is saying internally. According to the information provided by them, Alter Ego is specially designed in a particular manner to make optimum use of the machine learning technology. The same technique is reportedly trained to connect various neuromuscular signals with specific words. Scientists have allegedly thought that internal verbalisations are somehow or the other correlated with physical signs since back in 19th century. The researchers at MIT also went on to make this correlation with the help of what was found back in 1950’s.

HOW DID MIT CREATE THIS TECHNOLOGY?

The MIT team had a vision when it came to developing this type of technology. According to the information released by them, the MIT researchers started off by experimenting with neuromuscular signals that can most commonly be found on the faces of individuals. The researchers further went on to state that they carefully connected specific messages with the words that are used by users. “After identifying the most reliable sources of these signals on the face, the researchers wrote computer code to analyse all the data and pin down seven places where electrodes can be placed to pick up these signals. Eventually, they narrowed it down to four electrode locations on the jaw,” an online report suggests.

Additionally, the Alter Ego headset includes a set of bone-conduction headphones that allows devices to send vibrations through the user’s face into their inner ear. The method then goes on to block the user’s ears so that they can offer an unobtrusive way to pass the information on to other users. This exercise reportedly takes place without causing any interference with any other activity, which the user might be divulging in as such.

THIS PRODUCT COULD BE THE NEXT ALEXA?

According to the announcement made by MIT researchers, this type of device will soon be a part of a complete silent-computing system that allows users to pose and receive answers to challenging computational problems undetectable. In other words, if users want to find a solution to a problem, they won’t have to type it manually. It can only be done by just thinking about it. This type of technology can be integrated into the digital voice assistant arena as well. 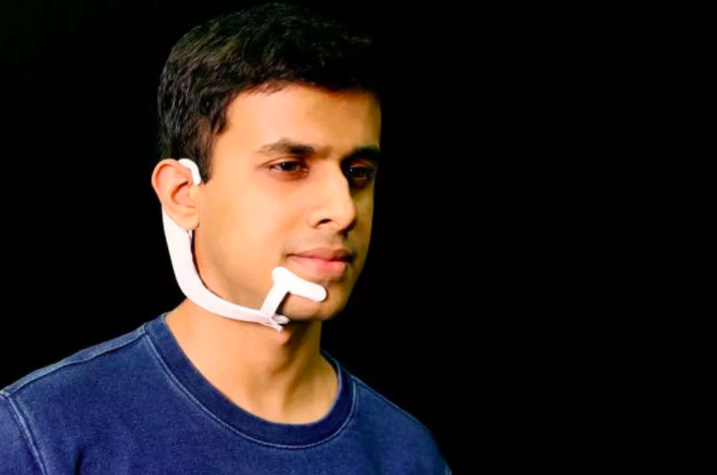