Mediocrity is rampant. Relatively few people know how to work hard in today’s society. Many feel they are entitled to life’s luxuries and ease of life without earning it, convinced that their riches are just one lottery ticket away. Even worse many will cheat, lie, claim others’ work as their own, slack off, play the blame game, and spent much energy avoiding real work. And yet they still feel deserving of the best jobs, the highest pay, and greatest rewards. We could lament this situation as more evidence of just how degraded our society has become. Instead, as in this Lessons of My Father video, I encourage you to look upon it as OPPORTUNITY. The hard worker can own the day and easily set himself apart from this field of “weeds.” Drawing upon some of my work experiences as a young man, I try to illustrate some these concepts in action: progression of trust, tackling the dirty jobs, being reliable and honest, having a mark of excellence in all you do, being accountable, having initiative, believing in yourself, and disregarding the Naysayers. No matter what the economy does (barring WROL), the good worker will always be in demand. An employer values the hard worker because he or she makes his job easier. They are trustworthy and accountable and can excel at tasks given. Because of this the hard worker will reach goals of promotions and increased pay and benefits. Yes there are exceptions where the politically connected, under-qualified, and undeserving individuals will get the job, but it is not the norm. In my life experience, I have seen many times more where it is the hard worker that gets the job as they break free of the often suffocating mediocrity. In your quest to achieve that cool job or career, you can expect with great regularity the Naysayers or Critics. Their motives vary and sometimes they really think they are protecting you from disappointment. But more often the Naysayers wish to make themselves feel and appear better as they prevent you achieving greater success which often seems to threaten them. Press on and ignore this negativity, applying the time-proven principles of hard and diligent work. Perseverance is key and they are many that give up when the going gets tough (as Calvin Coolidge said, “nothing is more common than unsuccessful men with talent”). Hard work can take the place being connected, gifted, or lucky (the harder you work, the “luckier” you get). As you do this, create a positive mental image of where you want to go, what you want to be within your mind. Visualize in great detail that which you wish to achieve. For example, if you want to be a gourmet cook, then visualize yourself cooking in that 5 Star restaurant as head chef, winning awards for your culinary excellence. This is a real and powerful part of achieving success in the work force. It will help you overcome the many challenges and obstacles that will always stand in your way of success. And while we all need money to pay the bills, try to put your focus on doing the job well and making a your name stand for excellence in whatever you do. This reputation will follow you will open doors of opportunity that remain tightly closed to the “weeds.” Greater pay, benefits, and responsibility will result by matter of course. Someone has to fill these positions of trust and it will be you because you have qualified yourself. REAL Workers are few but it is exactly this rarity that makes them so valuable. Be valuable. /////////Music used under license: “Work Out Fine” Teru (featuring Brad Sucks) 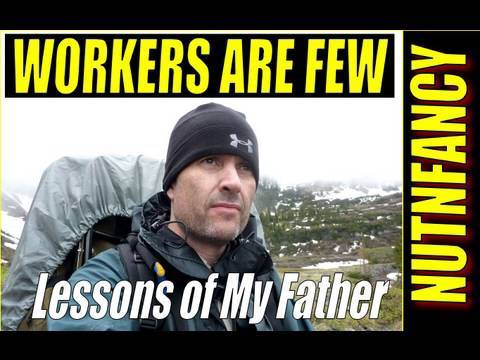