The RS-25, otherwise known as the Space Shuttle Main Engine (SSME), is a liquid-fuel cryogenic rocket engine that was used on NASA’s Space Shuttle and is planned to be used on its successor, the Space Launch System. Built in the United States of America by Rocketdyne, the RS-25 burns cryogenic liquid hydrogen & liquid oxygen propellants, with each engine producing 1,859 kN (418,000 lbf) of thrust at liftoff. Although the RS-25 can trace its heritage back to the 1960s, concerted development of the engine began in the 1970s, with the first flight, STS-1, occurring on April 12, 1981. The RS-25 has undergone several upgrades over its operational history to improve the engine’s reliability, safety and maintenance load.

On the Space Shuttle, the RS-25 was used in clusters of three engines mounted in the aft structure of the Orbiter, with fuel being drawn from the external tank. The engines were used for propulsion during the entirety of the spacecraft’s ascent, with additional thrust being provided by two solid rocket boosters and the orbiter’s two AJ-10-190 Orbital Maneuvering System engines. Following each flight, the engines were removed from the orbiter, inspected and refurbished before being reused on another mission.

On the Space Launch System (SLS), expendable versions of the engines are planned to be used in clusters of three, four or five, and draw their propellant from the rocket’s core stage. They provide propulsion during the first stage flight of the SLS, with additional thrust coming from two boosters. Following staging, the engines are discarded along with the rest of the core stage…

The RS-25 engine consists of various pumps, valves and other components which work in concert to produce thrust…

…NASA announced on September 14, 2011, that it would be developing a new launch vehicle, known as the Space Launch System (SLS), to replace the shuttle fleet. The design for the SLS features the RS-25 on its core stage, with different versions of the rocket being installed with between three and five engines. The initial flights of the new launch vehicle will make use of flown Block II RS-25D engines… Once the remaining RS-25Ds are used up, they are to be replaced with a cheaper, expendable version, currently designated the RS-25E (‘E’ for expendable).[dubious – discuss] This engine may be based on one or both of two single-use variants which were studied in 2005, the RS-25E (referred to as the ‘Minimal Change Expendable SSME’) and the even more simplified RS-25F (referred to as the ‘Low Cost Manufacture Expendable SSME’), both of which were under consideration in 2011.

NASA and the Stennis Space Center are planning on scheduling two more tests before wrapping up RS-25 testing before early September.

The test series is planned to show how the RS-25 engines will perform with: the new engine controller unit; lower liquid oxygen temperatures; greater inlet pressure due to the taller SLS core stage liquid oxygen tank and higher vehicle acceleration; and, more nozzle heating due to the four-engine configuration and its position in-plane with the SLS booster exhaust nozzles. New ablative insulation and heaters also will be tested during the series… 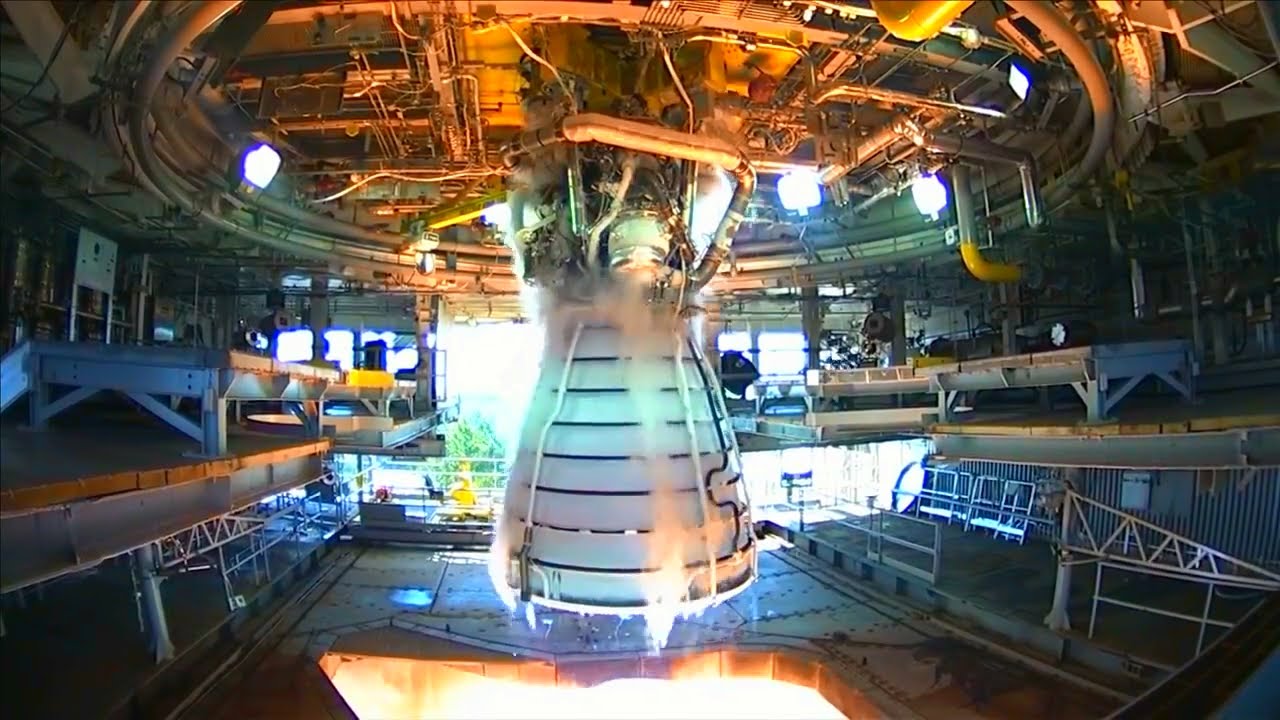