“Shows the functions of the railway and the methods of handling, sorting, dispatching and picking up the mail while in transit.” RPO mail clerks carry loaded while guns on the train. Mail carried includes live baby chicks.

Public domain film from the US Post Office, slightly cropped to remove uneven edges, with the aspect ratio corrected, and mild video noise reduction applied.
The soundtrack was also processed with volume normalization, noise reduction, clipping reduction, and/or equalization (the resulting sound, though not perfect, is far less noisy than the original).

In the United States, a railway post office, commonly abbreviated as RPO, was a railroad car that was normally operated in passenger service as a means to sort mail en route, in order to speed delivery. The RPO was staffed by highly trained Railway Mail Service postal clerks, and was off-limits to the passengers on the train. In the UK, the equivalent term was Travelling Post Office (TPO).

From the middle of the 19th century, many American railroads earned substantial revenues through contracts with the U.S. Post Office Department (USPOD) to carry mail aboard high-speed passenger trains; and the Railway Mail Service enforced various standardized designs on RPOs…

The Railway post office was introduced in the United States on July 28, 1862, using converted baggage cars on the Hannibal and St. Joseph Railroad (which also delivered the first letter to the Pony Express). Purpose-built Railway Post Office (RPO) cars entered service on this line a few weeks after the service was initiated. Their purpose was to separate mail for connection with a westbound stagecoach departing soon after the train’s arrival at St. Joseph. This service lasted approximately one year. The first permanent Railway Post Office route was established on August 28, 1864, between Chicago, Illinois, and Clinton, Iowa. This service is distinguished from the 1862 operation because mail was sorted to and received from each post office along the route, as well as major post offices beyond the route’s end-points.

George B. Armstrong, assistant postmaster at Chicago, originally came up with the idea of having mail processed and distributed while the mail was on board, en route in mail cars. With the assistance of Schuyler Colfax, Speaker of the House at the time, and A. N. Zevely, Third Assistant Postmaster General, he was duly authorized to test his ideas…

At their height, RPO cars were used on over 9,000 train routes covering more than 200,000 route miles in North America. While the majority of this service consisted of one or more cars at the head end of passenger trains, many railways operated solid mail trains between major cities; these solid mail trains would often carry 300 tons of mail daily.

After 1948, the railway post office network began its decline although it remained the principal intercity mail transportation and distribution function within the Post Office Department (POD). There were 794 RPO lines operating over 161,000 miles of railroad in that year. Only 262 RPO routes were still operating by January 1, 1962. In 1942, the POD began experimenting with a highway version of the RPO to serve the same purposes along routes where passenger train service was not available. These highway post office (HPO) vehicles were initially intended to supplement RPO service, but in the 1950s and 1960s, HPOs often replaced railway post office cars after passenger train service was discontinued. The last interurban RPO service was operated by Pacific Electric Railway on its route between Los Angeles and San Bernardino, California. When the post office made a controversial policy change to process mail in large regional “sectional centers,” mail was now sorted by large machines, not by people, and the remaining railway post office routes, along with all highway post office routes, were phased out of service. In September 1967 the POD cancelled all “rail by mail” contracts, electing to move all First Class mail via air and other classes by road (truck) transport. This announcement had a devastating effect on passenger train revenues; the Santa Fe, for example, lost $35 million (US) in annual business, and led directly to the ending of many passenger rail routes. 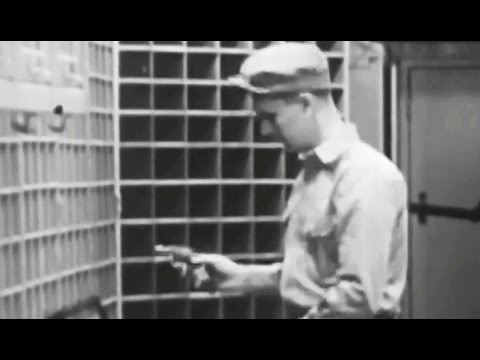