3rd quarterly report from NASA’s Exploration Systems Division on the Orion spacecraft and the Space Launch System. Released on August 22, 2013.

Orion Multi-Purpose Crew Vehicle (MPCV) is a planned beyond-low-Earth-orbit manned spacecraft that is being built by Lockheed Martin for NASA and Astrium for European Space Agency for crewed missions to the Moon, asteroids and Mars. It is planned to be launched by the Space Launch System. Each Orion spacecraft is projected to carry a crew of up to four or more astronauts. It is also planned as a backup for ISS cargo and crew delivery.

The MPCV was announced by NASA on 24 May 2011, aided by designs and tests already completed for a spacecraft of the cancelled Constellation program, development for which began in 2005 as the Crew Exploration Vehicle. It was formerly going to be launched by the tested-but-cancelled Ares I launch vehicle.

The MPCV’s debut unmanned multi-hour test flight, known as Exploration Flight Test 1 (EFT-1), is scheduled for a launch aboard a Delta IV Heavy rocket in 2014. The first manned mission is expected to take place after 2020. In January 2013, ESA and NASA announced that the Orion Service Module will be built by European space company Astrium for European Space Agency….

The Orion Crew and Service Module (CSM) stack consists of two main parts: a conical Crew Module (CM), and a cylindrical Service Module (SM) holding the spacecraft’s propulsion system and expendable supplies. Both are based substantially on the Apollo Command and Service Modules (Apollo CSM) flown between 1967 and 1975, but include advances derived from the space shuttle program. “Going with known technology and known solutions lowers the risk,” according to Neil Woodward, director of the integration office in the Exploration Systems Mission Directorate.

The MPCV resembles its Apollo-era predecessors, but its technology and capability are more advanced. It is designed to support long-duration deep space missions of up to six months. The spacecraft’s life support, propulsion, thermal protection and avionics systems are designed to be upgradeable as new technologies become available.

The MPCV spacecraft includes both crew and service modules, and a spacecraft adaptor.

The MPCV’s crew module is larger than Apollo’s and can support more crew members for short or long-duration spaceflight missions. The service module fuels and propels the spacecraft as well as storing oxygen and water for astronauts. The service module’s structure is also being designed to provide locations to mount scientific experiments and cargo…

The Space Launch System, or SLS, is a United States Space Shuttle-derived heavy launch vehicle being designed by NASA. It follows the cancellation of the Constellation Program, and is to replace the retired Space Shuttle. The NASA Authorization Act of 2010 envisions the transformation of the Ares I and Ares V vehicle designs into a single launch vehicle usable for both crew and cargo.

The SLS launch vehicle is to be upgraded over time with more powerful versions. Its initial Block I version, without an upper stage, is to lift a payload of 70 metric tons to orbit. The final Block II version with an integrated upper Earth Departure Stage is to, depending on the configuration, have a payload lift capability of 130 metric tons to low earth orbit, 12 metric tons above that of Saturn V, which would make the SLS the most capable heavy lift vehicle ever built.

SLS is to be capable of lifting astronauts and hardware to near-Earth destinations such as asteroids, the Moon, Mars, and most of the Earth’s Lagrangian points. SLS may also support trips to the International Space Station, if necessary. The SLS Program is integrated with NASA’s Orion Program, providing a four person multipurpose crew vehicle. SLS will use the ground operations and launch facilities at NASA’s Kennedy Space Center, Florida…

The core stage of the SLS is common to all vehicle configurations, essentially consisting of a modified Space Shuttle External Tank with the aft section adapted to accept the rocket’s Main Propulsion System (MPS) and the top converted to host an interstage structure. It will be fabricated at the Michoud Assembly Facility. The stage will utilize varying numbers and versions of the RS-25 engine depending on the configuration to be used: 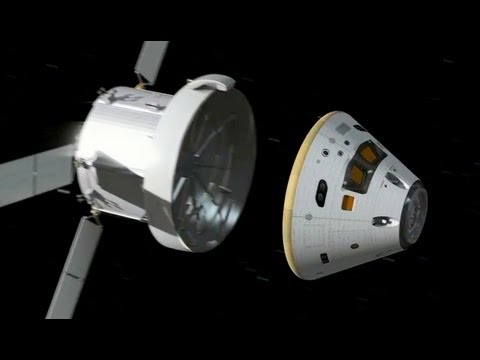