A hunter carries his setters in the trunk of his Chevrolet (the trunk has vents added on so they can breathe).

Originally a public domain film from the Prelinger Archives, slightly cropped to remove uneven edges, with the aspect ratio corrected, and mild video noise reduction applied.
The soundtrack was also processed with volume normalization, noise reduction, clipping reduction, and/or equalization (the resulting sound, though not perfect, is far less noisy than the original).

The trunk or boot of an automobile or car is the vehicle’s main storage compartment. Trunk is used in North American English and Jamaican English, while boot is used elsewhere in the English-speaking world — except in South Asia, where it is usually called a dickie/dicky or slang diggy (Native: डिकी/डिग्गी/ڈکی/ڈگی )…

The compartment is most often located at the rear of the vehicle, as storage areas are normally at the end of the vehicle opposite to which the engine is located. Some mid-engined cars (such as the Porsche 918 Spyder) and rear-engined cars (such as the Volkswagen Beetle and the Porsche 911) have the trunk situated in front of the passenger compartment. Vehicles such as the Volkswagen Type 3 have storage compartments both in the front and in the rear, with the rear compartment above the low-profile boxer engine. The mid-engined Fiat X1/9 also has two storage compartments, although the rear one is very small, but practically cuboid in shape. Sometimes during the design life of the vehicle the lid may be restyled to increase the size or improve the practicality and usefulness of the trunk’s shape. Examples of this include the Beetle redesign to the 1970s ‘Super Beetle’ and the pre-war and 1950s post war Citroën Traction Avant…

In 1950, Ford introduced a trigger catch to allow for one-handed lifting until the trunk lid was automatically caught in the open position.

In 1952, Buick marketed its counterbalanced trunk lid that “practically raises itself” and the automatic locking mechanism.

In 1956, the Packard “Predictor” show car designed by Richard A. Teague debuted at the Chicago Auto Show featuring innovations such as a power operated trunk lid.

In 1958, the remote activated electric trunk release was introduced by U.S. automakers in production vehicles.

The 1965 AMC Cavalier concept car featured a trunk lid with dual-action, scissor-type hinges allowing the panel to be opened like a normal trunk lid, or to be horizontally elevated even to the height of the car’s roof line for greater utility when hauling large and bulky items. Both the hood and trunk lid were made from identical stampings and interchangeable… 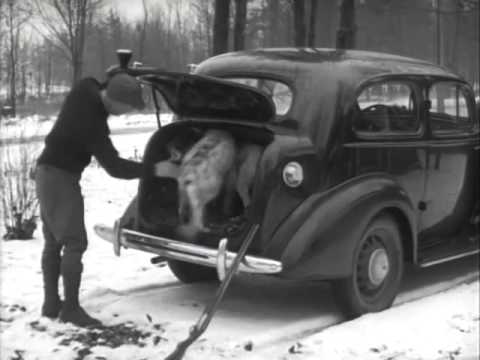