Reupload of a previously uploaded film with improved sound and video, and all in one piece instead of parts.

“Achieves a first revolution rendezvous and docking. Includes extravehicular activity with astronaut Richard Gordon attaching a tether to the Agena for station keeping exercises. Points out that the Agena burn propels astronauts Conrad and Gordon to a new altitude record of 739.4 nautical miles with an utterly fantastic view of the earth. Features the first fully automatic reentry in the Gemini Program.”

Public domain film from NASA, slightly cropped to remove uneven edges, with the aspect ratio corrected, and 1-pass exposure & color correction applied (cannot be ideal in all scenes).
The soundtrack was also processed with volume normalization, noise reduction, clipping reduction, and/or equalization (the resulting sound, though not perfect, is far less noisy than the original).

Gemini 11 (officially Gemini XI) was the ninth manned spaceflight mission of NASA’s Project Gemini, which flew from September 12 to 15, 1966. It was the 17th manned American flight and the 25th spaceflight to that time (includes X-15 flights over 100 kilometres (62 mi)). Astronauts Charles “Pete” Conrad, Jr. and Richard F. Gordon, Jr. performed the first-ever direct-ascent (first orbit) rendezvous with an Agena Target Vehicle, used the Agena rocket engine to achieve a world record high-apogee earth orbit, and created a small amount of artificial gravity by spinning the two spacecraft connected by a tether. Gordon also performed two extra-vehicular activities for a total of 2 hours and 41 minutes…

The direct-ascent rendezvous and docking with the Agena vehicle was achieved approximately 94 minutes after lift-off, depending on the on-board computer and radar equipment with only minimal assistance from ground support.

Gemini 11 used the rocket on its Agena target vehicle to raise its apogee to 850 miles (1,370 km), the highest Earth orbit ever reached by a manned spacecraft. The perigee was 179 miles (288 km), and maximum velocity (at perigee) was 17,967 miles per hour (28,915 km/h). The apogee record stands as of December 2011, even though men have achieved greater distances from Earth by flying to the Moon in the Apollo program. The maximum operational altitude of the Space Shuttle was lower, at 600 miles (970 km).

The crew docked and undocked four times, and still had sufficient Gemini maneuvering fuel for an unplanned fifth rendezvous. They did not remain in the high orbit, but changed it back to a near-circular one at 184 miles (296 km).

Gordon’s first EVA, planned to last for two hours, involved fastening a 100-foot (30 m) tether, stored in the Agena’s docking collar, to the Gemini’s docking bar for the passive stabilization experiment. Gordon achieved this, but as with previous Gemini EVAs, trying to do work for an extended period proved more fatiguing than in ground simulation, and the EVA had to be terminated after only half an hour.

The passive stabilization experiment proved to be a bit troublesome. Conrad and Gordon separated the craft in a nose-(Agena-)down position, but found that the tether would not be kept taut simply by the Earth’s gravity gradient as expected. But they were able to generate a small amount of artificial gravity, about 0.00015 g, by firing their side thrusters to slowly rotate the combined craft like a slow-motion pair of bolas.

Gordon successfully performed a second EVA standing up with his head and shoulders out of the hatch to photograph the Earth, clouds and stars. This was not tiring, and lasted more than two hours.

The mission ended with the first totally automatic, computer-controlled reentry by the U.S., which brought Gemini 11 down 2.8 miles (4.5 km) from its recovery ship USS Guam, only 1.5 miles (2.4 km) from the planned position.

The Gemini 11 mission was supported by 9,054 United States Department of Defense personnel, 73 aircraft and 13 ships. 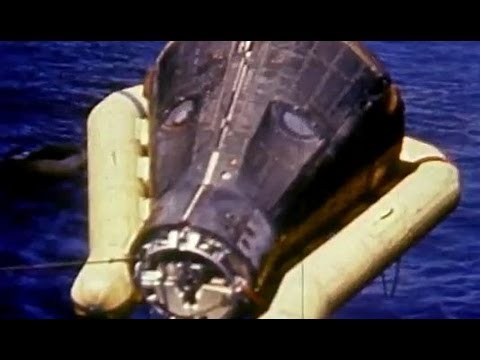