– “Flying Doughnut” is Princeton University’s P-GEM (Princeton –Ground Effect Machine), 20 feet in diameter, which resembles the Avro Avrocar, but has a single seat and a tail with a tail rotor.

Public domain film from the National Archives, slightly cropped to remove uneven edges, with the aspect ratio corrected, and mild video noise reduction applied.
The soundtrack was also processed with volume normalization, noise reduction, clipping reduction, and equalization (the resulting sound, though not perfect, is far less noisy than the original).

Princeton GEM X-2 Air Scooter…This is an experimental Ground Effect Machine (GEM) from the 1950’s. A nose fan supplied air to the air cushion contained within the peripheral curtain around the 8 ft. diameter platform. Ground Effect Machines are very successful and are used as ferries to carry cars and passengers across the English Channel.

Between 1959 and 1962, the Army agree to help fund ongoing testing of a ground effects machine (GEM) which had been developed by Princeton University. At that time the U.S. military had to type-classification for aircushion vehicles, and this became known simply as the Princeton GEM.

The saucer-shaped GEM was constructed of steel tubing and aluminum ribs and covered with fabric. It was 20 feet in diameter. The aircushion was created by a main vertical-lift engine which drove a horizontally-mounted four-bladed wooden propeller. The propeller drove air downward through a 19 foot nozzle in the saucer’s bottom to create a peripheral air curtain. A smaller engine and propeller in the horizontal tailfin provided forward propulsion.

Though never produced by the Army, the craft provided a wealth of information about the mechanics of air-cushioned flight.

The Army Transportation Research Command purchased two Curtiss-Wright Model 2500 Air Car ground effects machines (gem) in early 1960. The purchases were for engineering and operational evaluation as part of an ongoing investigation into vehicles for use in the military.

Curtiss-Wright had developed the Air Car as a four-passenger commercial vehicle and hoped that it would be accepted by the public as a sort of air-cushioned equivalent of the family car.

The overall visual effect was rather peculiar, but despite the eccentric appearance, the Air Car was essentially straightforward in construction.

The Air Car was built of welded steel tubing covered by molded sheet metal. It was powered by two 180hp Lycoming engines mounted one forward and one aft of the passenger compartment.

Each engine was used to drive, via reduction gears, a single four-bladed lift fan placed within a plenum chamber. The two chambers created a cushion of air 10-15 inches thick. Forward propulsion was supplied by air bled off the chambers and expelled at low velocity through two sets of louvers on each side of the vehicle.

It was fairly maneuverable and could reach speeds up to 38 mph. It was not really capable of all-terrain operation and never caught on commercially.

After several months of testing, the Army decided not to fund the project further, and it was abandoned in 1961. 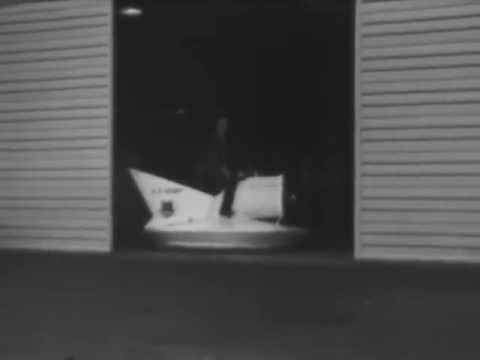