“UNITED STATES ARMY RESEARCH AND DEVELOPMENT – PROGRESS REPORT NUMBER SIX – CAMP CENTURY THIS IS THE STORY OF THE CONSTRUCTION OF CAMP CENTURY, GREENLAND’S CITY UNDER THE ICE. AFTER U.S. ARMY ENGINEERS SELECTED THE SITE IN MAY, 1959, NEEDED SUPPLIES WERE DELIVERED TO THE WORK CAMP IN A REMARKABLE LOGISTICAL OPERATION ACROSS THE ICECAP. CAMP CENTURY IS NOW AN ARCTIC RESEARCH CENTER.”

Public domain film from the National Archives, slightly cropped to remove uneven edges, with the aspect ratio corrected, and mild video noise reduction applied.
The soundtrack was also processed with volume normalization, noise reduction, clipping reduction, and/or equalization (the resulting sound, though not perfect, is far less noisy than the original).

Project Iceworm was the code name for a US Army Top Secret proposal during the Cold War (a study was started in 1958), to build a network of mobile nuclear missile launch sites under the Greenland ice sheet. The ultimate objective of placing medium-range missiles under the ice – close enough to Moscow to strike targets within the Soviet Union – was kept secret from the Danish government. To study the feasibility of working under the ice, a highly publicized “cover” project, known as “Camp Century” was launched in 1960. However, unsteady ice conditions within the ice sheet caused the project to be cancelled in 1966.

Details of the missile base project were classified for decades, first came light in public in January 1997, when the Danish Foreign Policy Institute (DUPI) was asked by the Danish Parliament to research the history of nuclear weapons in Greenland during the Thulegate scandal.

To test the feasibility of construction techniques a project site called Camp Century was started, located at an elevation of 6,600 feet (2,000 m) in northwestern Greenland, 150 miles (240 km) from the US Thule Air Base. The American radar and air base at Thule had been working successfully since 1951.

Camp Century was, at the time, described as a demonstration of affordable ice cap military outposts. The (secret) Project Iceworm was to be a system of tunnels 4,000 km in length, used to deploy up to 600 nuclear missiles, which would be able to reach the USSR in case of nuclear war. The missile locations would be under the cover of Greenland’s ice sheet and were supposed to be periodically changed. While Project Iceworm was secret, plans for Camp Century were discussed with and approved by Denmark and the facility – including its nuclear power plant – was profiled in the Saturday Evening Post magazine in 1960.

The “official purpose” of Camp Century, as explained by the US Department of Defense to Danish government officials in 1960, was to test various construction techniques under Arctic conditions, explore practical problems with a semi-mobile nuclear reactor, as well as supporting scientific experiments on the Icecap. A total of 21 tunnels were built with a total length of 3,000 meters; these tunnels also contained a hospital, a shop, a theater and a church. The total number of inhabitants was around 200. From 1960 until 1963 the electricity supply was provided by means of the world’s first mobile/portable nuclear reactor, designated the PM-2A and designed by Alco for the US Army. Water was supplied by melting glaciers and tested to determine if germs such as the plague were present…

Within three years after it was excavated, ice core samples taken by geologists working at Camp Century demonstrated that the glacier was moving much more intensively than had been anticipated, and would destroy the tunnels and planned launch stations in about two years. The facility was evacuated in 1965 and the nuclear generator removed. Project Iceworm was cancelled for good and Camp Century closed in 1966.

Nevertheless, the project generated valuable scientific information and provided scientists with some of the first ice cores, still being used by climatologists today…

…PM-2A: 2 MWe, plus heating. Camp Century, Greenland. Initial criticality October 3, 1960. The first “portable” nuclear power reactor. Brought to Greenland in parts, assembled, operated, disassembled, shipped back to CONUS. The PM-2A in Camp Century, Greenland, was designed by the American Locomotive Company to demonstrate the ability to assemble a nuclear power plant from prefabricated components in a remote, arctic location. The pressure vessel was subsequently used to investigate neutron embrittlement in carbon steel. This plant was shut down 1963-1964. PM-2A operated at a uranium-235 enrichment of 93 percent… 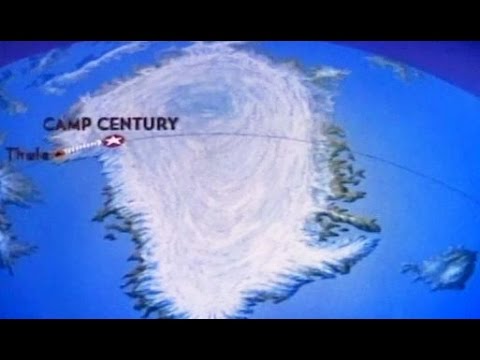